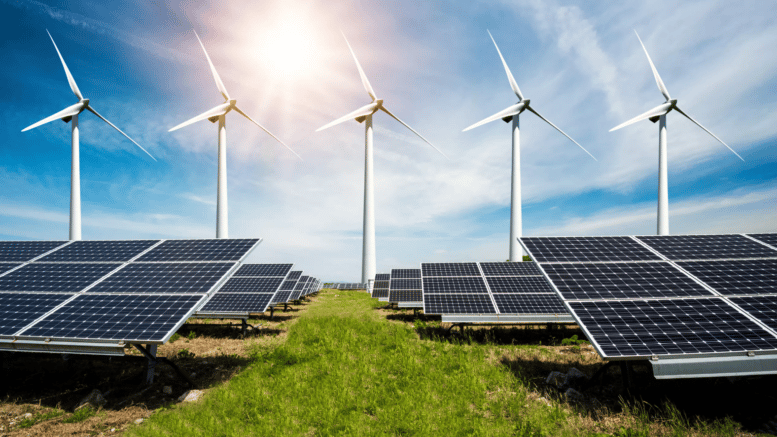 The United Nations consists of unelected and unaccountable Technocrats who are bent on establishing Technocracy as the global economic and financial system. Transforming energy into a completely controllable market, plus implementing a centralized and digitalized financial tracking system based on blockchain technology, will do just that. Once you see it, you cannot unsee it. ⁃ TN Editor

The would be King-Emperors of the world don’t just want to transform energy and change the weather, they also want to rebuild the entire financial system, no doubt to put the UN at the centre of the rivers of money.

Make no mistake, the lauded “loss and damages” fantasy plan was but a shiny bauble to distract you. The bigger ambit is to get the West to pay for the whole world to become a solar and windmill paradise and — “obviously” that means they have to rebuild the entire world’s financial system. (They actually say that).

Consider the numbers: The combined loss and damages claim for 55 countries over twenty years amounts to just $525 billion or a paltry $26 billion a year. But building all the useless renewable farms will supposedly require at least USD 4-6 trillion a year in investments.

Sensible investors will notice that it is 200 times as expensive to try to control the weather with windmills as it is to pay for all the current (theoretical) damage. Sadly, nobody is talking about sensible investments.

The UN announcement comes dressed up in a headline about the paltry Christmas fantasy payments to the third world. But a few paragraphs in are the “other details” about payments that are larger than most national GDP’s and the naked desire for the UN to be the conduit for the cash.

The cover decision, known as the Sharm el-Sheikh Implementation Plan, highlights that a global transformation to a low-carbon economy is expected to require investments of at least USD 4-6 trillion a year. Delivering such funding will require a swift and comprehensive transformation of the financial system and its structures and processes, engaging governments, central banks, commercial banks, institutional investors and other financial actors.

So much better to siphon from the centre, eh? Let me be your banker…

Think about how obscenely large this claim is in the strangely aptly named Sharm el-Sheikh Implementation Plan. On page 6 we casually find that there are layers of trillions, and despite the enormity of the values, no one bothered to explain if these are different additive trillions or overlapping trillions. And since the first reference has 54 mentions of the word “trillion” it isn’t easy to figure it out either. What does it matter, it’s only money?

They might be hoping for ten trillion per annum, with a 6 trillion one off bonus in the next eight years:

Highlights that about USD 4 trillion per year needs to be invested in renewable energy up until 2030 to be able to reach net zero emissions by 2050,18 and that, furthermore, a global transformation to a low-carbon economy is expected to require investment of at least USD 4–6 trillion per year;19

Notes with concern the growing gap between the needs of developing country Parties, in particular those due to the increasing impacts of climate change and their increased indebtedness, and the support provided and mobilized for their efforts to implement their nationally determined contributions, highlighting that such needs are currently estimated at USD 5.8–5.9 trillion20 for the pre-2030 period;

I defy anyone to explain the difference between a “renewable energy cost” and a furthermore category of… “low carbon global transformation cost”.

Only a week ago the UN was asking “rich nations” for well beyond a trillion dollars a year to help the Global South. But even at that bargain price, effectively the UN is demanding $1000 US per annum from every man, woman, pensioner and baby in the West.* How many families of four will be happy to chip in $4,000 US (or $6,000 Australian) every year to build solar farms in Mogadishu is a question no one wants to ask.

The bottom line is that the token offering of “loss and damages” to the world’s poor is nothing compared to the dark ambition of being the world’s Treasury and Energy Police.

The UN is the enemy.  The West conquered communism then gave its’ friends money and an office in Geneva.

*If the top 39 countries* on the Human Development Index pay up, the cost is split among 1.1 billion people.  Why stop at 39 countries? The 40th nation was Saudi Arabia, and I’m guessing they won’t pay a cent.

Biden’s handlers are bent on delivering the United States into the global Technocracy being formed by the United Nations, China, the World Economic Forum and events like the G20 meeting just held. The world is clamoring to implement digital health passports in conjunction with digital IDs, and Biden has completely caved in to global Technocrats.

Monday, November 21, 2022 - The Club of Rome and the Rise of the “Predictive Modelling” Mafia

While many are now familiar with the manipulation of predictive modelling during the COVID-19 crisis, a network of powerful Malthusians have used the same tactics for the better part of the last century in order to sell and impose their agenda.

Most people are bewildered by what is a global energy crisis, with prices for oil, gas and coal simultaneously soaring and even forcing closure of major industrial plants such as chemicals or aluminum or steel. The Biden Administration and EU have insisted that all is because of Putin and Russia’s military actions in Ukraine. This is not the case. The energy crisis is a long-planned strategy of western corporate and political circles to dismantle industrial economies in the name of a dystopian Green Agenda. That has its roots in the period years well before February 2022, when Russia launched its military action in Ukraine.

UN Special Representative Pramila Patten has been exposed for fabricating her claim that Russia was supplying its troops with Viagra as a part of its “military strategy” in the Ukraine conflict. The widely publicized lie was recycled from baseless NATO propaganda deployed during its 2011 Libyan regime change war.

According to such Great Reset luminaries as Bill Gates, Prince Charles, Michael Bloomberg, Mark Carney and Klaus Schwab, humanity is expected to solve the dual threat of Covid and global warming in one revolutionary sweeping reform.

Overall, like the Young Global Leaders program, the Global Shapers and New Champions represent another piece of the globalist octopus which has become quite effective at penetrating and manipulating world governments.

The very same criminal UN that wants to strip all property rights and enslave the planet with their Agenda 21 and Agenda 2030 along with their partners in crime the WEF is now telegraphing their global monetary policy.