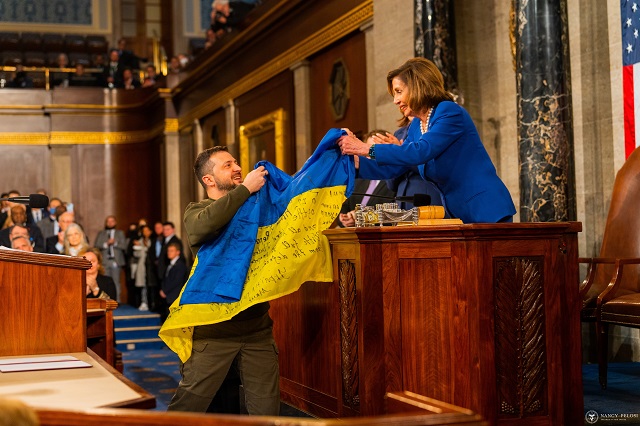 Ukrainian president Volodymyr Zelensky made good on his promise to demand more US aid during his trip to Washington on Wednesday.

Back in February, an anonymous US official invented a B-level action movie quote by Zelensky: “I need ammunition, not a ride”

Turns out he needs both, as he’s taken a US military jet to Washington, clad in fake battle dress, to beg for more than $45 billion in “ammunition.” https://t.co/v7CWfEF9i5

ZELESNKYY: "What's going to happen after Patriot [missile systems] are installed? After that, we will send another signal to President Biden that we would like to get more Patriots. We are in war. I'm sorry — I'm really sorry." pic.twitter.com/MY1VFTaD4T

President Biden in his press conference with @ZelenskyyUa evokes the #Hannukah story.

Jewish people around the world - President Zelensky among them - honor the timeless miracle of a small band of warriors fighting for their freedom against a larger foe.pic.twitter.com/pbpSiAPjm0

Zelensky told Biden that Ukraine needs more Patriot missile systems and told Congress they need to send him more artillery along with US tanks and planes.

"Ukraine never asked the American soldiers to fight on our land instead of us," Zelensky claimed in his speech before Congress -- just weeks after Ukraine was caught bombing Poland and blaming Russia for the strike in a bid to con America and NATO into the war. "I assure you that Ukrainian soldiers can perfectly operate American tanks and planes themselves."

"We have artillery, yes. Thank you. We have it. Is it enough? Honestly, not really," Zelensky said.


Ukrainian President Volodymyr Zelensky (@ZelenskyyUa) receives a standing ovation from lawmakers as he enters the House chamber to address a joint meeting of Congress.

Zelensky: I assure you, Ukraine can operate American tanks and planes themselves.

(Context: The U.S. has not provided certain items Ukraine has asked for like Abrams Tanks and F-16s, saying it would cause a dangerous escalation and require too much training time) pic.twitter.com/WcDNBAg3B4

WATCH: President Zelenskyy denounces Iran for aiding Russia's fight against Ukraine: "It is just a matter of time when they will strike against your other allies...if we do not stop them now. We must do it." pic.twitter.com/28jV1xAMms

Zelensky gives Nancy Pelosi a Ukrainian flag and a big kiss on the cheek pic.twitter.com/mutaCY5HvT

Speaker Pelosi after Zelensky’s address: “It was one of the finest speeches I’ve ever heard in the Congress” pic.twitter.com/MtRFHHzFFE

America stands with you and with the brave people of Ukraine.

Before Congress, you have spoken to the urgency of getting this funding bill done to approve more emergency wartime funding for Ukraine. pic.twitter.com/odRWRUt8RB

We have artillery, yes. Thank you. We have it. Is it enough? Honestly, not really. To ensure Bakhmut is not just a stronghold that holds back the Russian Army, but for the Russian Army to completely pull out, more cannons and shells are needed. If so, just like the Battle of Saratoga, the fight for Bakhmut will change the trajectory of our war for independence and for freedom.

If your Patriots stop the Russian terror against our cities, it will let Ukrainian patriots work to the full to defend our freedom. When Russia — when Russia cannot reach our cities by its artillery, it tries to destroy them with missile attacks. More than that, Russia found an ally in this — in this genocidal policy: Iran. Iranian deadly drones sent to Russia in hundreds — in hundreds became a threat to our critical infrastructure. That is how one terrorist has found the other.

It is just a matter of time when they will strike against your other allies if we do not stop them now. We must do it. I believe there should be no taboos between us in our alliance. Ukraine never asked the American soldiers to fight on our land instead of us. I assure you that Ukrainian soldiers can perfectly operate American tanks and planes themselves.

Politico reported Wednesday that Zelensky's private discussions with the Biden regime were going to be "dominated" by his delegation lobbying "for long-range Army Tactical Missile Systems, or ATACMS, and Gray Eagle and Reaper drones."

Putin responded to Zelensky's trip by promising "unlimited" funds to the Russian military to secure victory, the deployment of their new hypersonic "SATAN II" Sarmat missiles and expanded mobilization.

"The supply of weapons continues and the range of supplied weapons is expanding," Kremlin spokesman Dmitry Peskov said in response to Zelensky's trip. "All of this, of course, leads to an aggravation of the conflict. This does not bode well for Ukraine."

Russia's ambassador to the US, Anatoly Antonov, said Zelensky's speech confirms the US is in a proxy war with Russia and will only expand the conflict further.

"The Hollywood-style trip to Washington by the head of the Kiev regime has confirmed that the administration's conciliatory statements about the lack of intention to start a confrontation with Russia are just empty words," Antonov said, according to a transcript of his response to a journalist published by the Russian Embassy in Washington on Wednesday night.

Washington is throwing all its colossal resources, weapons, and intelligence capabilities at Kiev in pursuit of the "manic idea of defeating the Russians on the battlefield," Antonov said.

The ambassador specifically noted the US pledge to supply Kiev with Patriot air defense missiles, warning that such weapons and their crews would be legitimate targets for the Russian military. He also slammed the growing speculation about deliveries of ATACMS missiles and long-range attack drones.

"What was essentially announced to applause and sarcastic smirks, was the need to continue the ‘proxy war' against our country. Until a complete victory over us," he added.

Moscow has repeatedly tried to "appeal to common sense at all levels," the diplomat said, stressing that shipments of increasingly modern and long-range weapons and other provocative actions by the US and its allies are leading to an escalation, with consequences "impossible to even imagine."

This war could spiral out of control into a nuclear holocaust but at least the White House and Congress got to enjoy a photo op!