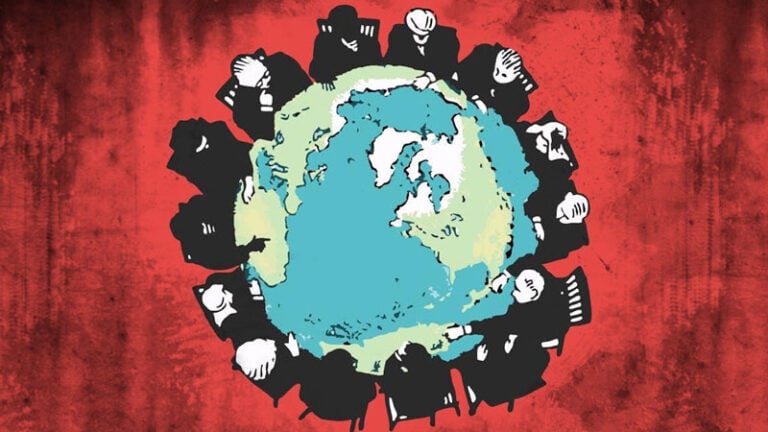 With its wonky, innocuous-sounding name, the ISDS framework for governing trade disputes is designed to garner as little interest (and therefore as little pushback) as possible from the public.

“a procedural mechanism that allows an investor from one country to bring arbitral proceedings directly against the country in which it has invested.

ISDS provisions are contained in many international agreements including free trade agreements, bilateral investment treaties, multilateral investment agreements, national investment laws, and investment contracts. If an investor from one country (the “home state”) invests in another country (the “host state”), both of which have agreed to ISDS, and the host state violates the rights granted to the investor under public international law (such as the right not to have property expropriated without prompt, adequate, and effective compensation), then that investor may sue the host state in neutral arbitration rather than in the domestic courts of the host state.”

In non-academic, practical language, nation-states such as the US no longer exercise ultimate authority over the economic goings-on within their own borders. In theory, foreign actors, normally well-endowed corporations, can sue the US government if it doesn’t satisfy their economic interests. In reality, the US government is sufficiently captured that it would never likely challenge the multinational corporations that wrote the ISDS into legislation themselves through the politicians they purchased. The ISDS is merely extra assurance of compliance, in case a true nationalist like Trump pretended to be in 2016 ever seized power.

Globalization (the disintegration of economic borders) drove the development of ISDS. So-called “free trade” agreements like NAFTA and GATT instantiated the concept into law. As academic Magdalena Bas explains:

“The element that differentiates the State from any other subject of International Law or any other actor in international relations is sovereignty and, as a response, States recognize each other as legally equal. Although sovereignty remains “a ticket of general admission to the international arena” ( Fowler and Bunck, 1995 ), its concept has evolved throughout history and has even come into tension with hyper-globalization ( Rodrik, 2011 ). One of the areas that illustrates this tension is Investor-State Dispute Settlement (ISDS).”

If a state has no say in how business gets done in its territories, it’s not a state. It’s a proxy for a larger power.

As far as I can suss out, there are two main reasons that most voters have never heard of the ISDS, much less thought about its implications for their lives:

a.) it’s boring technical stuff; citizens are conditioned to get emotionally worked up about tribal culture war issues instead of focusing on the historic robbery underway by the parasitic elite class, and

b.) it’s great for multinational corporations that actually run US policy (the aforementioned parasitic elites).

Joe Biden is certainly in no condition to take a stand, and anyway didn’t have the moral fiber. Even if somehow he broke from his handlers’ script and kicked up a fuss about ISDS, he’d get the JFK treatment in a jiffy. Biden is a disposable puppet, as all presidents are.

Incrementally, methodically, and ruthlessly, the multinational corporate state, headed by the WEF, coalesces in the shadows. Once it’s fully completed, backed by legal constructs like ISDS and buttressed by the budding technetronic police state, resistance will be virtually impossible.

Ask yourself: why has my GOP Congressman, an ostensible patriot with the flag pin lapel, never mentioned ISDS? Could the answer be that he’s on the take just like his Democrat colleagues, that he is cucked to the business interests that fund his campaigns, whom he hopes to work for more explicitly once he leaves office?

Ben Bartee is an independent Bangkok-based American journalist with opposable thumbs. Follow his stuff via Armageddon Prose and/or Substack, Patreon, Gab, and Twitter. He is a regular contributor to Global Research.

Wednesday, November 24, 2021 - The Wedding of Billionaire Heiress Ivy Getty Was a Show of Elite Power and Symbolism

Ivy Getty is the great-granddaughter of tycoon and industrialist J. Paul Getty, the founder of Getty Oil. Stating that this man was rich is a gross understatement. In 1957, Fortune magazine named him the richest living American and, in 1966, the Guinness Book of Records named him as the world’s richest private citizen. Getty’s immense wealth turned his family into an American dynasty which, after several generations, is still worth billions of dollars.