On January 13 of this year, Hasibullah Ahmadi, head of Afghanistan’s Ministry of Interior’s counternarcotics department, asserted that drug trafficking from the country has dropped, but admitted this illicit trade continues in some provinces. These comments raise the question of the Taliban’s ties to the narcotics market and previous attempts to curb drug production. The declassified documents featured in today’s post, all released under the Freedom of Information Act (FOIA), are a selection from the new Digital National Security Archive collection, Afghanistan War and the United States, 1998-2017, which was published in December of last year. The three documents examined in this post detail the Taliban’s ties to international trafficking networks in the late 1990s and attempts to regulate the market in the early 2000s in an effort to curry favor from the international community. Taken together, the documents describe the Taliban’s ties to drug trafficking schemes and how poppy bans, even when effective, financially benefited the Taliban and associated trafficking consortiums. 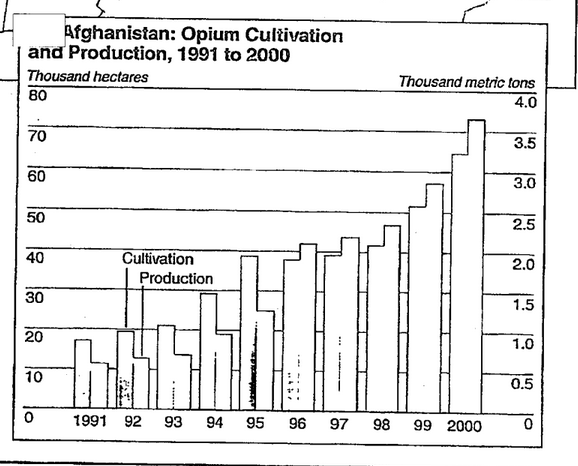 As the early Taliban movement emerged, from 1994 to 1996, narcotics production skyrocketed in Afghanistan, with declassified documents asserting that the group aligned themselves with international drug traffickers. There were indications from U.S. officials that narcotics production in the country significantly increased following the Taliban’s control over large swaths of the country. In a now-declassified Secret May 2001 National Intelligence Estimate (NIE), the Office of the Director of National Intelligence outlined that by 2000 the country supplied an estimated 72% of the world’s “illicit opium”. This heavily redacted document included a map noting opium poppy growing areas in Afghanistan (page 26), and a chart showing rising opium cultivation between 1991 and 2000. The NIE noted that producers in Afghanistan had switched to supplying and producing more heroin over several years before 2001.

This analysis was reinforced by a now-declassified Top Secret December 1998 CIA research paper, prepared by the Director of Central Intelligence (DCI) Crime and Intelligence Center, and recently released under the FOIA to the National Security Archive. This heavily-excised Top Secret report details the explosion of the narcotics market under Taliban rule, noting the ties of the group to Quetta Alliance, an international drug trafficking ring, which shared ties to Osama bin Laden. Furthermore, this report asserts that the Taliban’s increasing role in the country caused the narcotics business to explode. The paper also assesses the group’s involvement in illicit drug traffic, stating that it included top Taliban leaders and that this trade intensified “over the last several years,” leading to immense profits for the fundamentalist organization. Notably, the DCI Crime and Intelligence Center states that Afghan narcotics suppliers had shifted towards international markets, beyond distributing to drug traffickers in Turkey. The paper outlines that Taliban fighters provided “logistic support” and “protection” for drug trafficking and laboratories within the country. Most significantly, the paper argues that the Taliban forged ties to the Quetta Alliance, a major regional trafficking group, and terrorist sponsor of Osama bin Laden.

This paper was not alone in describing the Quetta Alliance. A publicly-available August 1994 report compiled by the Drug Enforcement Administration (DEA) Intelligence Division, describes the Quetta Alliance as an alliance between three powerful trafficking groups operating out of Quetta, within Pakistan’s Baluchistan Province. The DEA report stated that this loose alliance was based on familial ties, and described the operation as “similar to a large manufacturing or service consortium.” This connected to the assertion in the aforementioned paper by the DCI Crime and Intelligence Center, which argued that once the Quetta Alliance became the dominant narco-trafficking group in southern Afghanistan, it provided financial support and recruits to the burgeoning Taliban.

By late 1999, the Taliban had banned poppy cultivation. This would be followed by a ban of opium cultivation and trafficking in July 2000, the latter in an edict by Taliban leader Mullah Omar. However, these bans did not interfere with trafficking and sale of opium or poppy. A declassified Secret July 2001cable from the Defense Intelligence Agency (DIA) stated that while the ban was primarily effective, it still substantially increased the Taliban’s revenue from illicit drug trafficking. The ban followed the U.N. Security Council resolutions 1267 and 1333, in 1999 and 2000 respectively, which condemned “the significant rise in the illicit production of opium” and demanded that the Taliban work to “virtually eliminate the illicit cultivation of opium poppy.” Later, the DIA cable notes that the Taliban likely weighed recognition from the international community from its own interests when considering an extension of the ban.

This now-declassified DIA cable further stated that while the Taliban’s ban would likely reduce the worldwide opium production by at least 50%, the ban resulted in the quadrupling of the Afghan price for opium, morphine base, and heroin – which were previously at record lows. The cable explicitly states that one year after the ban the Taliban was still benefiting substantially from drug revenues, “… chiefly from its taxes on continuing narcotics trafficking and from Taliban-owned narcotics stockpiles, whose value has increased substantially.” The DIA cable also notes that the ban would likely not have an impact on the U.S. over the coming months, because its main heroin sources were from Southeast Asia and Latin America. While the Taliban never faced having to weigh its interests in extending the ban due to the U.S. invasion beginning in October 2001, the DIA cable notes all of the influences that the Taliban would likely weigh in the decision making processing, including the potential recognition from the international community, major narcotics traffickers’ reactions to an extension, the size of stockpiles, and the impact on their own finances.

For more documents on the Taliban, see the Archive’s numerous sourcebooks, including the September 23, 2021, post, “Newly Published Documents Cast Doubt on Claims Taliban Will Give Up al Qaeda.”