German Protesters Fed Up With US Wars Blockade Ramstein Air Base

About 2,500 people gathered outside the largest US base in Germany over the weekend as the Trump administration considered a possible US withdrawal from the country.

Sputnik Deutschland contributor Marcel Joppa was on the scene for Saturday’s protest, joining people of all ages including seniors as old as 80 years old, who endured the summer heat and faced down the police to show their discontent with US military operations launched from German soil.

Organized by the “Stop Air Base Ramstein” civil group, the protest was attended by several politicians, most notably Sara Wagenknecht, the leader of The Left Party faction in the Bundestag. 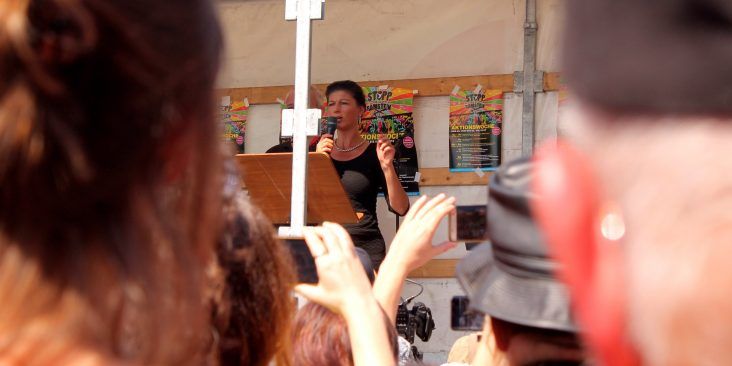 Addressing the crowd, Wagenknecht spoke out on the issue of drone warfare, “which although not written about much in the big press continues to take place.”

“Kill orders are arranged at the touch of a button. These are just outrageous crimes! And it is unacceptable that they be supported here, from German soil, in any way!” the politician stressed.

Pointing out that the bombings of Iraq and Afghanistan were carried out from German territory, Wagenknecht argued that there shouldn’t be a single German region where the Germany Constitution, which does not allow wars of aggression or extraterritorial killings by drones, does not apply.

“What is happening here is a case for our counterintelligence bodies, if they are to do their jobs properly,” the politician said. “There are over 1,000 US military bases around the world, and none of them exist to ensure the security of those countries,” she added.

Demanding that Berlin pursue a more independent foreign policy, Wagenknecht criticized Chancellor Angela Merkel, accusing her of being too submissive to the US.

The protesters were also addressed by writer and peace activist Eugen Drewermann, who reminded them that the US had bombed seven predominantly Muslim countries since 2001.

“We are involved in these actions, and we are partly responsible. We must finally reject this policy. We Germans have every reason to press the brake, with all our might, to correct old mistakes,” he said.

Unfortunately, Drewermann noted, NATO had always viewed Russia as an enemy, emphasizing the immense disparity in the number of military bases the two countries operate internationally.

Several dozen protesters set off for the front of the central entrance to the air base, where they sat down on the asphalt and blocked traffic. The police soon sounded a warning that the protest would be broken up and that those who resisted would be detained. Participants began singing songs and shouting slogans, including “For international solidarity!” and “Why are we doing this? For the sake of our children!”

About a dozen people have been detained, including an elderly American couple.

Saturday’s protests came on the heels of reports of a US Department of Defense study on the consequences of a major drawdown of US forces in Germany. The study was initiated after President Trump expressed his interest in the pullout at a meeting with military officials earlier this year, according to officials speaking to The Washington Post. Trump was reportedly taken aback by the cost of maintaining the estimated 35,000 active-duty troops stationed in the European country.

The US has maintained a presence in Germany since the end of World War II. During the Cold War, the US presence was justified as necessary to deter the Soviet Union, which had troops in East Germany. The Soviet Union collapsed in 1991, and the last of the former Soviet contingent was withdrawn in 1994, but the US bases remained, even during a period of unprecedentedly warm relations between Moscow and Washington in the 1990s and most of the 2000s.