Yemen - After 200,000 Died An Embarrased U.S. Finally Calls For Negotiations

The war on Yemen today is a brutal example of how the expansion of global capitalist interests destroys nations.

It first takes the form of neoliberalism (often innocently labeled as globalisation) and then, as the inevitable structural collapse of the targeted country begins, (with its inevitable popular resistance undermining the political order), a more overt form of violence is introduced.

The war on Yemen moved towards the most violent form of war. A siege on a whole country with the obvious intent to cause a genocidal famine of the resisting population.

The attacking nations, the U.S., Saudi Arabia, Britain and the UAE, planned to grab Yemen's resources but failed in their war. They are now making first moves to end the war. They finally recognized that they are unable to win while the financial and reputational costs of the stalemate steadily increases.

It is not by chance that this move comes after clown prince Mohammad bin Salman's recent Khashoggi disaster. It was that murder that moved the attention to his leading role in the genocidal war on Yemen.

A recent large reportage by the New York Times drew attention to the war induced famine. It includes haunting pictures of starving small children. In another censorship idiocy Facebook removed mentions of the piece that included pictures because they showed 'naked' dying children with no flesh on their bones. That might have been a friendly gesture by Facebook owner Mark Zuckerberg to his chap Mohammad bin Salman, but it only increased the coverage of the issue.

More reports about the true casualty numbers of the war on Yemen emerge. A year ago Moon of Alabama criticized the often quoted "10,000 dead" that the media continue to repeat as the official casualty count of the war:

Up to July 2017 the U.S.-Saudi coalition had flown more than 90,000 air-sorties over Yemen. Most of those will have involved weapon releases. Are we to believe that only 10,000 civilians have been killed by all these bombs and the additional artillery, sharpshooters and suicide attacks? That would be inconsistent even with western reports of the known mass incidents during the war. 100,000 dead civilians caused by the war so far is a more likely number than the never changing 10,000.

Since then the numbers increased due to continued fighting but even more due to the raging famine. 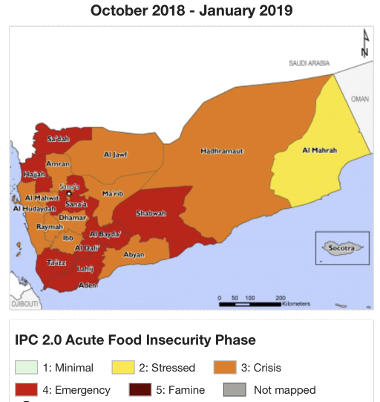 The Armed Conflict Location and Event Data Project (ACLED), a group formerly associated with the University of Sussex, estimates that since March 2015, when the Saudis launched the war, 70,000 to 80,000 were killed due to combat. That estimate is conservative based on documented death as a result of fighting. The Save the Children NGO estimated in late 2017 that 50,000 children died that year for lack of food and from a ravaging Cholera epidemic.

The famine only increased since then. By the end of this year another 50,000 children will have died. The total number of dead caused by the war and blockade since March 2015 has thus likely exceeded the 200,000 mark.

Aid agencies attempt to bring more food into the country. But continued fighting over Hodeidah, the only port in the Houthi controlled area, makes that increasingly difficult. Even if food reaches the harbor there is no longer a reliable distribution system for cost free aid in the country. The UN and other rely on commercial traders to distribute aid. These traders take a share to cover the risk of transport under continued Saudi bombing.

Neither the exile government under Saudi control nor the Houthi have paid the state employees. High inflation, caused by the Saudi controlled central bank of Yemen, threw people into utter poverty. Starvation thus happens even when food is available in the markets because the people simply have no money to pay for it. This is the reason why the famine conditions shown in the map above prevail far beyond the Houthi controlled enclave in northwest Yemen.

The war caused not only a huge amount of death and a famine but also an immense destruction of buildings:

Saudi and UAE bombardment has destroyed at least 421,911 houses, 930 mosques, 888 schools, 327 hospitals and health facilities, and 38 media organizations, while halting the operation of 4,500 schools and leaving more than 4 million people displaced.

All the destruction and death were not mentioned or downplayed in 'western' media because of the Saudi influence operation to hype its clown prince Mohammad bin Salman. The Saudis effectively bribed the United Nations to downplay the horrors they cause:

Saudi Arabia has demanded that aid agencies operating in Yemen should provide favourable publicity for Riyadh’s role in providing $930m (£725m) of humanitarian aid, an internal UN document reveals.
...
Future grants distributed by [the UN aid agency] Ocha to agencies should be tied to the amount of beneficial publicity given to Saudi Arabia, the documents advises. It also calls for Ocha to seek favourable publicity for the Saudi humanitarian effort in Yemen in newspapers such as the New York Times and the Guardian.

The Saudi spend an estimated $200 million per day in their war on Yemen. The money they pledged this year to the UN for aid in Yemen sums up to less than 5 days of their military expenditure.

The murder in Istanbul of Jamal Khashoggi on order of Mohammad bin Salman changed the picture. Suddenly it is en vogue to point out Saudi misdeeds and influence. There is public and political pressure on the governments in Washington and London to end the war.

The Trump administration is taking the first tiny steps to end the war. Yesterday Defense Secretary Mattis called for a ceasefire in Yemen:

“The longer-term solution—and by longer-term, I mean 30 days from now—we want to see everybody around a peace table based on a ceasefire, based on a pullback from the border, and then based on the ceasing of dropping bombs that will then allow [Special Envoy Martin Griffiths] to get them together in Sweden and end this war,” Mattis said ...

The time is now for the cessation of hostilities, including missile and UAV strikes from Houthi-controlled areas into the Kingdom of Saudi Arabia and the United Arab Emirates. Subsequently, Coalition air strikes must cease in all populated areas in Yemen.

Substantive consultations under the UN Special Envoy must commence this November in a third country to implement confidence-building measures to address the underlying issues of the conflict, the demilitarization of borders, and the concentration of all large weapons under international observation.

The sequentiality will of course not work. The Houthi and their allies will not stop their operations before the Saudi's end their bombing. A simultaneous ceasefire of both sides is the only possibility. Neither will the Houthi put their missile forces under international observation.

The U.S. statement neglects the economic aspect of the famine. While welcoming the plan UN envoy Martin Griffiths emphasized the central bank issue as one problem causing the famine:

“I urge all concerned parties to seize this opportunity to engage constructively with our current efforts to swiftly resume political consultations to agree on a framework for political negotiations, and confidence-building measures, in particular enhancing the capacities of the Central Bank of Yemen, the exchange of prisoners and the re opening of Sanaa airport," he said in a statement.

The U.S. plan is a no-go but nonetheless a big change of tact and a starting point.

Interestingly the State Department statement acknowledges Houthi strikes on the UAE. While several such strikes were claimed neither the UAE nor the U.S. had so far confirmed them. A Notice to Airmen (NOTAM) issued by the UAE two weeks ago hinted at such strikes (see A1987/18 NOTAMN) but gained little notice. The ability of the Houthi to strike at a distance of some 1,000 miles is likely a main motive for the Saudis and the UAE to accept a ceasefire and negotiations.

The Saudi war on Yemen has failed. A recent third attack by UAE supported forces on the harbor of Hodeidah was again repelled. The frontlines are littered with burned out military vehicles. Meanwhile Houthi attacks into Saudi Arabia continue. The Houthi also continue to gain new capabilities. A few days ago they unveiled a new missile with a range of 150 kilometers and an impressive precision of 3 meter. They demonstrated its accuracy in a video which showed one hit on a disused house and a second one on a camp of Sudanese mercenaries south of Hodeidah.

Even if negotiations start next month the war on Yemen will not end anytime soon. The death toll will increase throughout the winter. Despite the high cost the people of Yemen will continue to fight until the last foreign force leaves their country.

As Isa Blumi writes in his essay:

For over a century, Yemenis have resisted a global capitalist machine that today is threatening to break down. Ironically, it was Yemen that educated high-level Ottomans about the limits of modern government.

Perhaps responsible leaders today can also consider what lessons they can draw from Yemen and hopefully avoid the impending disaster that awaits those too closely linked to a collapsing Western-centered capitalist order ensnared in southern Arabia’s destruction.