While the Free Thought Project often reports on the megacorp Nestle and their rampant abuse and exploitation of drinking water supplies across the nation, few are aware that the company has been found using slave labor. What’s more, as governments across the world attempt to crack down the use of slave labor by requiring companies to report on its use, Nestle is fighting it, saying that it will end up costing consumers at the register.

Late last month, Nestle issued a warning against proposed legislation that would require them to report on their efforts to weed out slavery within their company. The company says the cost of checking to see if they are forcing people to work against their will end up being passed on to the consumer.

As the Sydney Morning Herald reports, companies operating in Australia with an annual turnover of $100 million or more would be required to annually report on the risks of modern slavery within their business and the actions they’ve taken to address those risks under the federal government’s draft Modern Slavery Bill 2018.

Nestle owns over 2000 brands and operates in 189 countries and has a history of using slave labor to produce its products. Yet they are warning against the legislation that would have them report on issues related to human trafficking, slavery, sexual servitude and child labor within their businesses’ operation and supply chains.

In a senate committee last month, Nestle claimed that the reporting requirements to keep them from participating in slavery and human trafficking would add “cost and time” to its businesses and suppliers “which will need to be borne somewhere.”

“While we are of the view that the mandatory requirements are sensible, in practical terms this difference means that multinational companies will have to prepare bespoke statements for each country in which they are required to report,” Nestle’s submission said.

” … Not all suppliers may bear those costs themselves; some may pass them on to customers/consumers.”

As TFTP reported in 2016, Nestle became embroiled in controversy, as the company went public with the admission that slave labor had been found in the multinational company’s supply chain in Thailand. Nestle claimed at the time that they would promise to self police and rid themselves of this problem.

One would think that since they claimed to already be self-policing, that simply passing this information on to the Australian government would be an easy task. However, evidence of Nestle’s lack of follow through on self-regulation can be clearly seen in the Engel-Harkin (aka the Cocoa Protocol), in which it promised to self-regulate and ultimately end child slave labor in their supply chain — signed in 2001.

According to an article by The Daily Beast:

EIGHT COMPANIES—INCLUDING NESTLÉ, MARS, AND HERSHEY—WERE SIGNATORIES OF THE MASSIVE ACCORD, PLEDGING $2 MILLION TO INVESTIGATE THE LABOR PRACTICES AND ELIMINATE THE “WORST FORMS OF CHILD LABOR,” THE OFFICIAL TERM FROM THE INTERNATIONAL LABOR ORGANIZATION, BY 2005. WHEN THE JULY 2005 DEADLINE ARRIVED WITH THE INDUSTRIES YET TO MAKE MAJOR CHANGES, AN EXTENSION WAS GRANTED UNTIL 2008.

WHEN THE NEXT DEADLINE CAME AND WENT, A NEW PROPOSAL AROSE. BY 2010, THE COMPANIES BASICALLY STARTED ANEW WITH A TREATY CALLED THE DECLARATION OF JOINT ACTION TO SUPPORT IMPLEMENTATION OF THE HARKIN-ENGEL PROTOCOL. THIS DOCUMENT PLEDGES TO REDUCE THE WORST FORMS OF CHILD LABOR BY 70 PERCENT ACROSS THE COCOA SECTORS OF GHANA AND IVORY COAST BY 2020.

Those that have followed the use of slave labor in the supply chain of theses large multinational corporations understand that these companies consistently claim they will self regulate and yet the use of child slave labor within the cocoa industry has increased dramatically.

A report from the Payson Center for International Development of Tulane University, and sponsored by the U.S. Department of Labor, found the number of children working in the cocoa industry in 2013-14 increased 51 percent to 1.4 million, compared to the last report in 2008-09.

A company who has faced no consequences after being caught stealing water, and draining natural aquifers across the planet to fill plastic bottles will likely have no problem complying with the reporting law if it passes. However as their history shows, the idea that it will lead to positive change is unlikely.

The best way to stop Nestle from using slave labor in their production lines is to stop buying their products. Below is a list of some of their popular brands and products to help you understand just how far their reach goes. 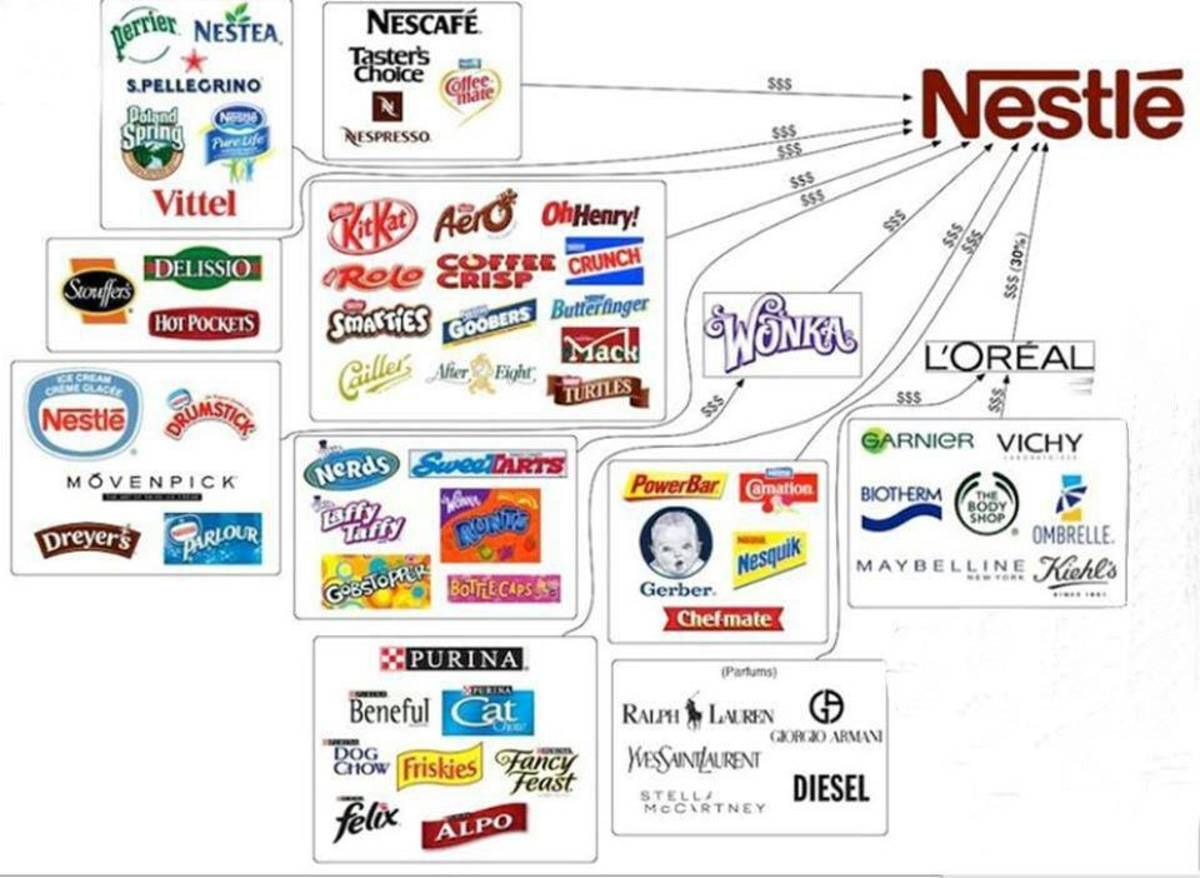