We have long maintained that the alleged chemical attack in Douma, Syria, on April 7 2018 was faked by Jihadists shortly before they were evicted from that Damascus suburb.

By the end of last year leaked documents and a whistle blower from the Organisation for the Prohibition of Chemical Weapons (OPCW) had proven that the OPCW managers had manipulated the report their staff had written about the incident. The OPCW inspectors who had investigated the case on the ground in Douma found that there was evidence that a chemical attack had happened. The murdered people seem in videos from the alleged attack must have died of other causes. The yellow canisters found at the locations of the alleged attack were not dropped from helicopters but clearly manually placed.

Using the Arria-formula, a procedure to have witnesses testify to the UN Security Council, Russia and China invited other UN members to listen to the testimony of OPCW inspector Ian Henderson. He denounced the false final report the OPCW management had published. Henderson, a South African engineer, was a team leader at the OPCW where he had worked for more than twelve years.

I need to point out from the outset, I am not a whistleblower. I don’t like that term. I am a former OPCW specialist who has concerns in many areas and I consider this a legitimate and appropriate forum to explain again these concerns.Secondly, I must point out that I hold the OPCW in the highest regard. As well as the professionalism of the staff members who work there.

However the concern I have does relate to some specific management practices in certain sensitive missions. The concern, of course, relates to the [Fact Finding Mission] investigation into the alleged chemical attack on the 7th April in Douma in Syria. My concern, which is shared by a number of other inspectors, relates to the subsequent management lock-down and the practices in the later analysis and compilation of the final report.

There were two teams deployed. One team which I joined shortly after the start of field deployments was to Douma in Syria, the other team deployed to Country X. The main concern relates to the announcement in July 18, of a new concept, the so-called FFM Core Team which essentially resulted in the dismissal of all the inspectors who had been on the team deployed to locations in Douma and had been following up with their findings and analysis.

The findings of the final FFM report were contradictory, were a complete turn-around, with what the team had understood collectively. During and after the Douma deployments and by the time of release of the interim report in July 2018 our understanding was that we had serious misgivings that a chemical attack had occurred.

What the final FFM report does not make clear and thus does not reflect the views of the team members who deployed to Douma. (In which case I can really only speak for myself at this stage). The report did not make clear what new findings, facts, information, data or analysis in the fields of witness testimony, toxicology studies, chemical analysis, engineering and or ballistics studies had resulted in a complete turn-around in the situation from what was understood by the majority of the team and the entire Douma team in July 2018.

In my case I had followed with a further six months of engineering and ballistics studies into the cylinders. The results of which had provided further support for the view there had not been a chemical attack. This needs to be properly resolved, we believe (Douma FFM Team), through the rigours of science and engineering.

Perhaps a closing comment from my side, is that I was also the inspection team leader who developed and launched the inspections, the highly intrusive inspections, of the Barzah [Scientific Studies and Research Center] facility outside of Damascus. And I did the inspections and wrote the reports for the 2 inspections prior to and the inspection after the chemical facility, or the laboratory complex at Barzah SSRC, had been destroyed by the missile strike. That however is another story altogether and I shall now close.

The Barzah SSRC was destroyed in a large scale U.S. missile attack shortly after the Douma incident. It had been a civil institution concerned with agricultural and medical research. No prohibited substances were found there during intrusive OPCW inspections before and after the U.S. strike. 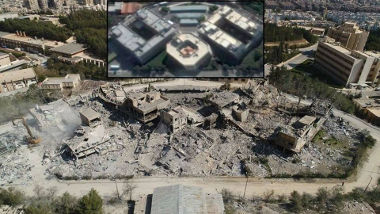 Barzeh Research center before and after - bigger

In his closing remarks at the UNSC Russia's Permanent Representative at the UN, Vassily Nebenzia, said:

Today’s discussions reveal one thing clearly – that something fishy is cooking in the OPCW. When we point at it, our colleagues tell us every time that OPCW, the 2013 Nobel peace prize laureate, is the gold standard of professionalism, integrity and impartiality. We would like it to be such and we adopted a PRST in November 2019 exactly aiming at this. Unfortunately, the impartiality and integrity of the OPCW TS is seriously questioned, and not just by us and other member states, as today’s presentation demonstrated. Members of the “Courage Foundation” can hardly be labeled as “Russian agents”. They are reputable personalities and include such figures as Jose Bustani, first OPCW DG, respectable members of academic community, former senior officials of the US and UK intelligence community, and such names as Noam Chomsky and Oliver Stone to name a few. (You were provided with a copy of their letter and related materials).

Why do some of our colleagues so vehemently defend the reports by the OPCW FFM, which some are believed were fabricated? Because any seed of doubt about chemical episodes conclusions would lead to challenging the expediency and legitimacy of already illegitimate missile attacks against a sovereign UN member state. In that light the Douma incident plays a key role. Because if it transpires that the FFM report was made up, it would lead to questioning earlier episodes like Khan-Shaykhun and others, which resulted in the termination of [Joint Investigation Mechanism].
...
Our colleague from Viet Nam asked what to do next, what are the nest steps. I think that this issue must be discussed at the OPCW. Legitimate questions and issues that member states face should be addressed and discussed. The question why the first report of the OPCW FFM was shelled initially, and then disappeared and destroyed should be answered. So far we are denied – we and other member states – are denied such an opportunity.

Videos from Douma at the time of the incident showed some 30 bodies of dead persons. Most were children. It is up to day unknown who they were and who had murdered them. The OPCW manipulation of the original reports of its inspectors' findings is a cover up for that huge crime.

---
Previous Moon of Alabama coverage of the Douma incident and its aftermath: