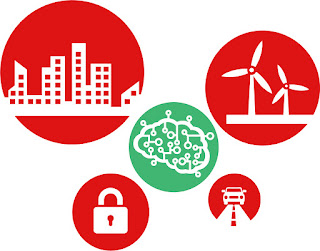 Why would anyone care about BP buying Fotech?

Because Fotech "uses artificial intelligence and edge computing in its products, covering areas such as surveillance, transport management, cable monitoring and rail management."


"Distributed Acoustic Technology converts thousands of kilometers of optical fibers already in place in our cities into millions of acoustic and vibration sensors. DAS converts cables into a network of state-of-the-art sensors. This allows cities to send and receive information with the benefit of providing anonymity to its citizens, but also to monitor city infrastructure continuously – in real-time and on a much more detailed level."

Two years ago, Fotech and Dr Robert Ferguson revealed how the city of Calgary could use DAS to track vehicles and people.

Fotech's "Smart City Solutions" boasts that they can use DAS to "recognize and detect the acoustic and seismic signatures of footsteps, vehicles, trams and trains."


Cities can easily be converted into DAS public monitoring platforms

Fotech's "Making smart transport networks a reality with DAS" report revealed that cities can easily be converted into DAS monitoring platforms because they can use pre-existing or 5G fiber optic networks.

Fotech's story titled "Smart City Expo 2019" revealed how smart cities can use DAS to transform fiber optic cables into "highly sensitive acoustic sensors – innately listening to the activities around them."

DAS is a great way for law enforcement to secretly monitor people because fiber optic cables are hidden from public view.


"Using fiber optic cables that are often hidden from view, Fotech’s DAS technology can monitor international borders automatically, giving you an enhanced understanding of in-situ (on-site) activities, and gather intelligence on events and patterns in and around your border."

And isn't that really what smart city surveillance is all about? Secretly monitoring people and vehicles and gathering intelligence on everyone?


BP bills Fotech as "a security management platform optimized to protect and secure your assets 24/7." But it should really be billed as a 24/7 public monitoring platform optimized to track vehicles and people in real-time.
BP joins a long list of private corporations that stand to profit from turning cities into 24/7 smart city surveillance platforms.