On Good Friday, Microsoft released a video promoting its association with the elite’s favorite artist: Marina Abramovic. After massive backlash, the video was set to “private” and all traces of the campaign were scrubbed from Microsoft’s official website. Here’s what this fiasco was all about.

To promote its mixed reality device Hololens 2, Microsoft teamed up with prominent occultist Marina Abramovic to create an art project named The Life. In a promotional video posted on Microsoft’s official YouTube account, Abramovic is described as the “most legendary performance artist working now”.

The art project consists of people wearing the Holohens device to witness a ghostly version of Abramovic appearing out of nowhere while walking around while wearing a symbolic red dress.In the video, which was released on Good Friday, Marina says that the project allows her to attain a form of immortality.

“The Life is dealing with what is going to stay after I’m not there anymore, and I can face myself, and this frightening experience. Really like you’re facing your own ghost, but it is always this greater idea of immortality. Once you die the work could never die because the work of art can continue. In performance, the piece is only in the memory of the audience and nowhere else. Here I am kept forever.”

The video was not well received at all. After a flood of negative comments and about 90% thumbs down, Microsoft set the video to “private”. Since nothing can be truly deleted from the internet, the video was re-uploaded by other sources.

Microsoft also removed all traces of the campaign from its official website – although it still appears in Google search results.

This search result now leads to an error message. We still see that Microsoft describes Abramovic as “arguably the world’s most acclaimed performance artist”.

The fact that powerful entities such as Microsoft keep showering Abramovic with infinite praise is quite telling. Because it doesn’t take much in-depth research to understand what she is truly about.

Mainstream sources describe Marina Abramovic as a performance artist who is known for “confronting pain, blood, and physical limits of the body”. More importantly, there’s a powerful element the permeates all of her works: Occult ritual. 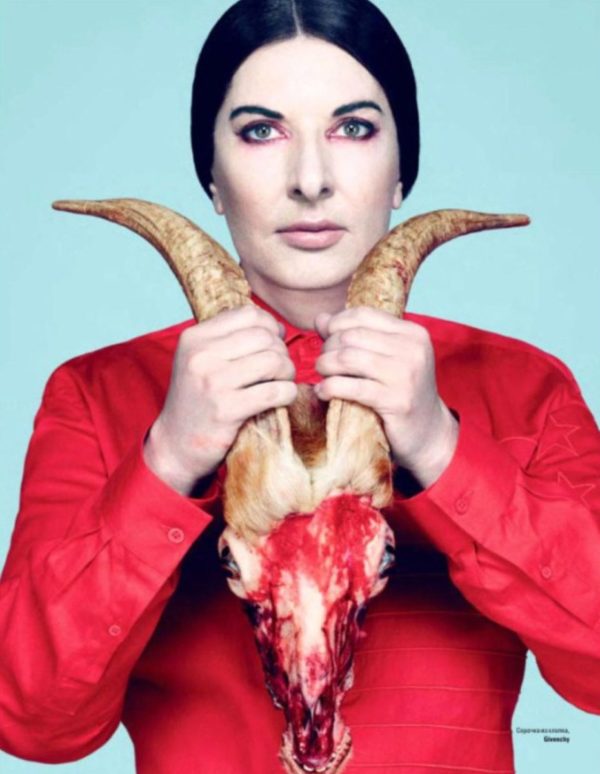 This picture of Abramovic in ELLE Magazine sums up everything she is about. She holds the head of a goat by the horns (representing the drawing of “power” from Baphomet) while wearing a red dress (symbolic of the transformative powers of occult ritual and sacrifice).

For decades, Abramovic has been associating with the world’s most prominent artists, celebrities and politicians in events that are permeated with elements of black magic. In recent years, she became mostly known for inviting John Podesta to one of her “Spirit Cooking” events which involve lots of blood and other bodily fluids. Here’s a video dating from 1997 where she prepared such an event.

Marina Abramovic and Lady Gaga at an event that took place at Watermill Center in 2013. In this picture, they stand before a woman lying in what looks like a pool of blood. Guests scooped that blood with spoons to eat it up. The event was dubbed “Devil’s Heaven”. Can’t make this up.

In another Marina Abramovic event, guests wear lab coats as they partake in mock-cannibalism.

In yet another event hosted by Abramovic, a cake in the likeness of Blondie’s Debbie Harry is cut up and eaten by guests. If that’s what they do in public events, one can only wonder what they actually do behind closed doors.

In this magazine photoshoot, Abramovic stands before a model with her innards exposed.

What do you think this picture alludes to?

To sum everything up, Abramovic’s Twitter handle used to be AbramovicM666.

There is symbolism in releasing a video on Good Friday where an occultist talks about achieving immortality. There is also symbolism in the fact that the founder of this company is out there using a pandemic to push a global vaccine that is combined with a microchip device. It doesn’t take a fertile imagination to connect some dots and to understand the underlying philosophy going on here.