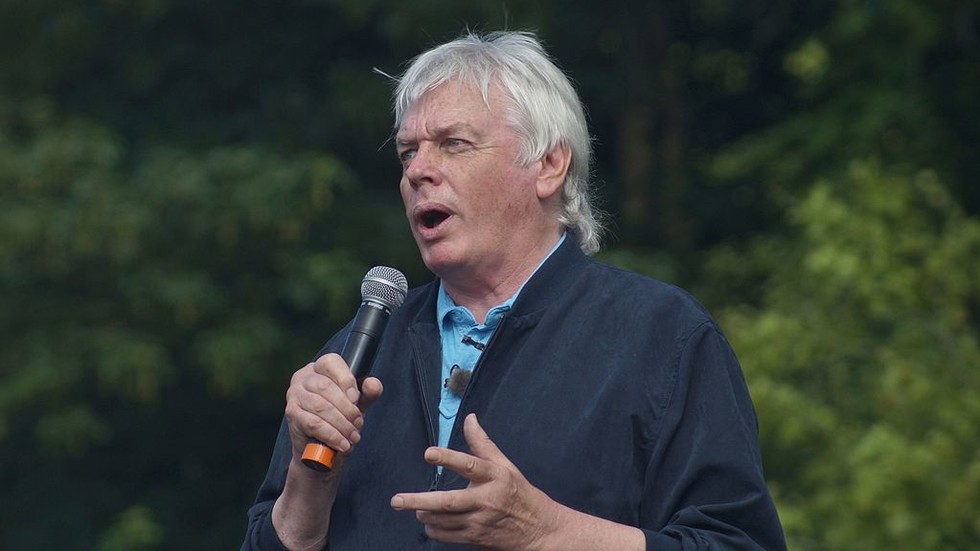 The banning of the former TV presenter from Facebook and YouTube is an assault on free speech and free expression which needs to be forcefully resisted, whatever your views are on Icke’s theories on world governance.

I’m old enough to remember when David Icke was a television sports presenter. For the past thirty-five years or so he’s been putting his ideas out on how he thinks the world operates – and it’s fair to say he has caused plenty of controversy. Some people laughed at him, some agreed with him, some were indifferent. No one campaigned for him to be banned.

Recently though, that’s changed. Icke has been accused of “preaching hate” and of peddling “unsubstantiated conspiracy theories.”  And now he's charged with promoting “toxic” and “dangerous misinformation” about Covid-19.

Less than 20 minutes after he tweeted his piece, the “mysterious wikipedia editor” Andrew Philip Cross had added the article to Icke’s wiki page.Writing in the Observer on April 25, Nick Cohen berated social media platforms for not banning Icke.

And, just a week later, both Facebook and YouTube had obliged, deleting Icke and all his work.

Cohen argued there was a “liberal” case for banning Icke. But there isn‘t and it‘s extremely Orwellian to suggest that there is. No one is forced to listen to Icke or read his books. If Cohen takes issue with Icke‘s positions, he should challenge him to a public debate. If what Icke says is so obviously crackers, then the Observer columnist should be able to wipe the floor with him very easily. Instead, he seems to want him silenced. That's disturbing.

The silencing of views we disagree with puts us on the fast-track to tyranny. In chapter two in his classic 1859 text ‘On Liberty’, John Stuart Mill explained why silencing dissenting opinions is wrong.

Firstly, the opinion which is threatened with suppression may possibly be true. “Those who desire to suppress it, of course, deny its truth; but they are not infallible. They have no authority to decide the question for all mankind, and exclude every other person from the means of judging,” Mill wrote. It’s pertinent here to remind ourselves that Cohen, who wants to suppress Icke’s opinions, and sets himself as an arbiter of what views should or shouldn’t be heard on leading social media platforms, was a prominent supporter of the Iraq War.

What greater – and more dangerous – “conspiracy theory” was there than the one which claimed that Iraq had to be invaded because it possessed WMDs? But is anyone calling for Iraq War promoters to be banned? No of course not, they’re the ones gunning for Icke.

Mill goes on: “To refuse a hearing to an opinion, because they are sure that it is false, is to assume that their certainty is the same thing as absolute certainty. All silencing of discussion is an assumption of infallibility. Its condemnation may be allowed to rest on this common argument, not the worse for being common.”

Are we absolutely certain that all of Icke’s opinions are false? Perhaps some are, but others aren’t. That’s what Mill refers to in his second reason why opinions should not be suppressed. “Though the silenced opinion be an error, it may, and very commonly does, contain a portion of truth; and since the general or prevailing opinion on any object is rarely or never the whole truth, it is only by the collision of adverse opinions that the remainder of the truth has any chance of being supplied.”

Even if the opinion is the whole truth, then “vigorously and earnestly” contesting it is a positive for liberty too, as it helps to make sure that the opinion is held rationally and not just as a prejudice because so many are saying it’s true. One would imagine Mill would give very short shrift to those who arrogantly dismiss any view they don’t agree with as “a conspiracy theory” and denounce all dissenting voices as “cranks.”

John Stuart Mill was a British philosopher and his ideas no doubt played a part in why Britain was a country where free speech and free expression were more respected than in many other places. But alas, that’s no longer the case today.

In 2011 he wrote a column entitled ‘Who will rid us of hate channels such as Press TV?’, a month later Ofcom removed Press TV’s station’s licence to broadcast in the UK. Faux-left neocons and extreme “centrists” are at the forefront of the new illiberal censorship drive. Cohen has previously lashed out against RT and what he called its “dumb‘ viewers.”

Those targeting David Icke pose a bigger danger to society than Icke does. The “hate” comes less from those under attack, than those doing the attacking.

In any case “hate speech” laws – with the subjective nature of what constitutes the “offence” –  are fundamentally illiberal as they are being used, increasingly, to stifle debate. If someone says something you think is hateful, then challenge them.

I don’t agree with a lot of what Katie Hopkins has said, but her suspension from Twitter earlier this year, cheered by those who oppose her, was wrong. She has exactly the same right to express her opinions as me, Nick Cohen, or anyone else.  The argument that the leading social media companies are private corporations and so can ban anyone they like is disingenuous. The market share of Facebook, YouTube and Twitter  makes them effective monopolies and a de facto online “Speaker’s Corner.” The people who spend so much time trying to get people they don’t like banned from these platforms know just how important they are.

In a sense, this is not really about David Icke, it’s about attempts to police debate and limit the parameters of which opinions can be heard publicly, and which can’t. In a marketplace of ideas, it should be the public – and the public alone – who decide what ideas to “buy” and what ideas to leave alone. No one is forced to buy anything in this market place, but equally no one is told: “You’re banned from having a stall because you are trying to sell the ‘wrong’ ideas.”

I made a point of watching David Icke’s live interview on London Real yesterday precisely because of the attempts to ban him. A lot of people seem to have done the same.

If we want to fight back against the new censors, we need to step up to the plate and wake up to what's going on before it's too late. It may be David Icke today, but which dissenting voice will it be tomorrow?