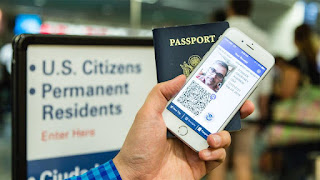 credit: Wall Street Journal
The Feds are using the pandemic as an excuse to ID and track millions of innocent American's cellphones inside their homes.
This past August, a Motherboard article revealed the U.S. Customs and Border Patrol (CBP) had signed a $476,000 contract with Venntel, a cellphone data mining corporation.
Motherboard went on to explain why the Feds signing a contract with Venntel is so troubling.

"The news highlights how law enforcement agencies continue to buy data that may in some cases require a warrant or court order to obtain."

What Motherboard is saying is that the CBP is using Venntel to monitor American's cellphones without a warrant.

"This new contract raises even more concerns about the cozy and ongoing relationship between the federal government and these data brokers, which operate in the shadows and can amass mountains of sensitive personal data without any restrictions," Congresswoman Carolyn Maloney, and Chairwoman of the House Committee on Oversight and Reform said.

What makes this even more disconcerting is how law enforcement can use Venntel to monitor every cellphone in a 'certain house.'

"If you search a certain house, you're only going to get three or four different signals out of there. I think from that standpoint, you could definitely try and identify specific people, the first [Venntel] source said. I think that was part of the goal in using it for government customers and things like that, is that you're able to identify devices, and then you can do device searches to see where else they might have been, they added. A second person who has worked with the company [Venntel] said the data in a geofenced area is not going to contain 100 percent of devices in that location, and that identifying someone would be laborious."

Five U.S. senators were so horrified about law enforcement secretly monitoring millions of innocent Americans cellphones that they sent a letter to the CBP demanding an explanation.

"As revealed by public contracts, CBP has paid a government contractor named Venntel nearly half a million dollars for access to a commercial database containing location data mined from applications on millions of Americans’ mobile phones. CBP officials also confirmed the agency’s warrantless tracking of phones in the United States using Venntel’s product in a September 16, 2020 call with Senate staff."

The letter asked what legal analysis did the Feds use to justify creating a national cellphone location tracking program?

"The senators also requested the inspector general investigate any legal analysis CBP’s lawyers performed before the agency started to use this surveillance tool and how CBP was able to begin operational use of Venntel’s location database without the DHS Privacy Office first publishing a Privacy Impact Assessment."

It is hard to imagine a more invasive national public surveillance program than what the CBP is conducting right now under our very noses.

A recent Vice article revealed that the CBP is refusing to justify to Congress how it is legal to ID and spy on American's cellphones inside their homes without a warrant.

"CBP officials confirmed to Senate staff that the agency is using Venntel’s location database to search for information collected from phones in the United States without any kind of court order," the letter signed by Wyden and Warren, and addressed to the DHS OIG, reads. "CBP outrageously asserted that its legal analysis is privileged and therefore does not have to be shared with Congress. We disagree."

As the Vice article pointed out, the Internal Revenue Service (IRS) is also using Venntel's data to ID and monitor American's cellphones without a warrant.

The CBP's admission that it is not restricting its personnel to only use Venntel near the border sends an unmistakable message to Americans everywhere: law enforcement treats everyone like a suspected criminal.

There simply is no justification for a so-called democratic country treating millions of its citizen's like suspected criminals. Our country is on the precipice of becoming a full-blown surveillance state.