This brief clip from an FBI training film helps explain the actions undertaken by agents during a raid on a secure storage facility earlier this year:

In March of this year, the US Attorney in Los Angeles, California secured an indictment against a secure vault company, alleging the company was engaged in money laundering, drug trafficking, and hiding taxable assets. None of the company's employees or owners were indicted.

FBI agents spent five days turning US Private Vaults upside down. Agents apparently emptied every safety deposit box housed by the business. They did this in complete contradiction of the limits imposed on them by the FBI's own warrant affidavit. Here's Eric Boehm of Reason with some background:

[T]he unsealed warrant authorizing the raid of U.S. Private Vaults granted the FBI permission to seize only the business's computers, money counters, security cameras, and large steel frames that effectively act as bookshelves for the boxes themselves. Per FBI rules, however, the boxes could not be left unsecured in the vault after the raid had been completed, so agents had to take them into custody too.

The FBI could have taken custody of the boxes without opening them and sought warrants for those implicated by the investigation. Instead, the FBI agents emptied the boxes while still on the premises, engaging in dozens of searches not authorized by any warrant.

Here's what the FBI said it would do in its warrant request: 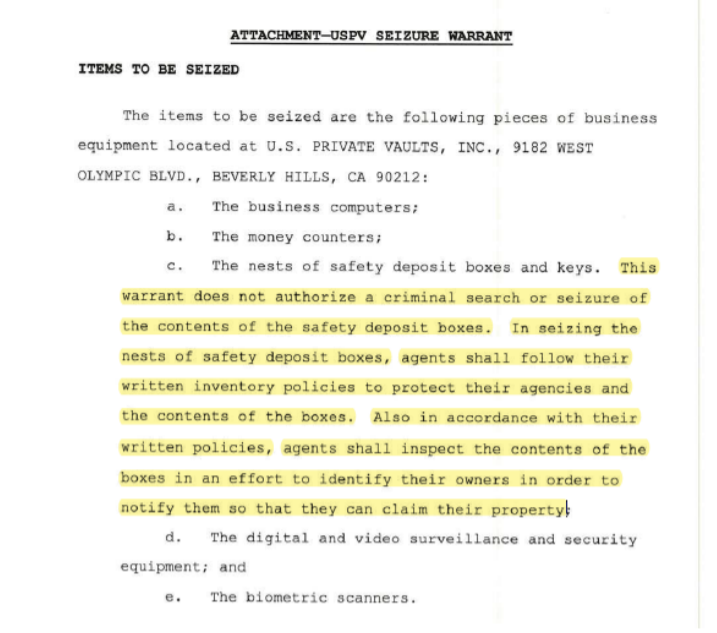 If you can't see the picture, the relevant part of the sworn statement says:

This warrant does not authorize a criminal search or seizure of the safety deposit boxes. In seizing the nests of safety deposit boxes, agents shall follow their written inventory policies to protect their agencies and the contents of the boxes. Also in accordance with their written policies, agents shall inspect the contents of the boxes in an effort to identify their owners in order to notify them so that they can claim their property.

And the agents weren't supposed to empty the boxes and catalog the contents. This is spelled out explicitly in the FBI written policies.

The inspection should extend no further than necessary to determine ownership.

So, permission was given to look in the boxes for anything that might identify the owners so they could come get their stuff from the FBI. But instead of doing that, agents took everything from the boxes and started forfeiture proceedings -- all without determining who owned what or providing any evidence at all that the items found in the nearly 1,000 boxes were obtained illicitly. Indeed, no customers of US Private Vaults have been accused of any criminal activity.

Here's what's happening now, in apparent direct contradiction of the search warrant's limits and the FBI's own policies.

[T]he FBI is now trying to confiscate $86 million in cash and millions of dollars more in jewelry and other valuables that agents found in 369 of the boxes.

Prosecutors claim the forfeiture is justified because the unnamed box holders were engaged in criminal activity. They have disclosed no evidence to support the allegation.

Beyond the $86 million in cash, the FBI is seeking to confiscate thousands of gold and silver bars, Patek Philippe and Rolex watches, and gem-studded earrings, bracelets and necklaces, many of them in felt or velvet pouches. The FBI also wants to take a box holder’s $1.3 million in poker chips from the Aria casino in Las Vegas.

The items the government claims -- without facts in evidence -- are the result of criminal activity includes unemployed food service worker's life savings: $57,000 he obtained from lawsuit settlements stemming from a car accident in which he suffered a spinal injury and a successful claim against a landlord for chronic housing code violations.

Another US Private Vault's customer (being represented, like the man above, by the Institute for Justice) lost her life savings to the FBI's actions, a total of $80,000 that is obviously important to the 80-year-old woman who presumably wasn't participating in drug dealing and money laundering. Contrary to the warrant and FBI guidelines, agents took everything in her safety deposit box even though they found identifying information as soon as they opened the box. Recordings of the raid show an agent holding her ID up to the camera before proceeding to go through the box, opening sealed envelopes and emptying their contents into another container.

It wasn't just cash, coins, and other valuables being seized by agents. The take also included personal items belonging to Paul and Jennifer Snitko. This is what the FBI -- until goaded into being a little less assholish by negative press and a handful of lawsuits -- considered to be evidence of criminal activity.

In the Snitkos' box, along with the baptismal certificate: a pilot's log, heirloom jewelry, collectible coins, a marriage certificate, a birth certificate.

The FBI recently returned these items to the Snitkos, making them one of the lucky few to have their property returned. But those with larger quantities of valuable items or cash are probably going to have to sue to get their items returned. The FBI says it's only willing to return items from about a quarter of the boxes its agents searched and seized without a warrant.

The FBI has returned the contents of about 75 boxes and plans to give back the items found in at least 175 more, because there was no evidence of criminality, Mrozek said. Federal agents have not determined who owns what was stored in many other boxes.

That's the latest from Thomas Mrozek, the spokesperson for the Los Angeles US Attorney's office. The FBI and federal prosecutors are hoping to take ownership of as much as possible from the remaining boxes, all of which is detailed in the very long inventory list compiled by the agents who performed the raid.

This is extremely ugly. Unfortunately, the use of civil forfeiture shifts some of the burden to those whose assets were seized. The government doesn't really have to do anything. If claimants don't come forward before June 24, those unclaimed assets will become government property, whether or not they had anything to do with criminal activity.

Those that do file a claim will have to deal with a convoluted and expensive process that helps ensure the government will still get to keep most of what it seized under the guise of performing an inventory. The burden of proof for the government is extremely low. And it's apparently telling judges a dog gave agents permission to engage in a bunch of warrantless seizures.

Drug-sniffing dogs at the store during the raid alerted to traces of drugs on most of the money found in boxes, FBI agent Justin Palmerton claimed in a court statement. The boxes containing that cash are subject to criminal investigation, he said.

This claim is stupid as fuck and hopefully won't be given any respect from judges that are subjected to it. Most currency contains trace amounts of drugs. That's common knowledge. But the FBI isn't raiding banks just because a dog alerted near the ATM. This is a completely disingenuous claim and, by itself, isn't evidence of anything more than the FBI's willingness to use literally anything to justify its warrantless acquisition of other people's property.

Thank you for reading this Techdirt post. With so many things competing for everyone’s attention these days, we really appreciate you giving us your time. We work hard every day to put quality content out there for our community.

Techdirt is one of the few remaining truly independent media outlets. We do not have a giant corporation behind us, and we rely heavily on our community to support us, in an age when advertisers are increasingly uninterested in sponsoring small, independent sites — especially a site like ours that is unwilling to pull punches in its reporting and analysis.

While other websites have resorted to paywalls, registration requirements, and increasingly annoying/intrusive advertising, we have always kept Techdirt open and available to anyone. But in order to continue doing so, we need your support. We offer a variety of ways for our readers to support us, from direct donations to special subscriptions and cool merchandise — and every little bit helps. Thank you.