The sanctions war the U.S. waged against Germany and Russia over the Nord Stream 2 pipeline has ended with a total U.S. defeat. 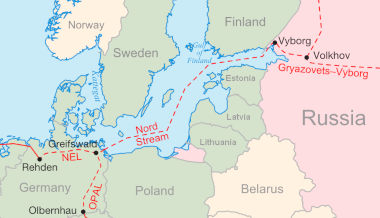 The U.S. attempts to block the pipeline were part of the massive anti-Russia campaign waged over the last five years. But it was always based on a misunderstanding. The pipeline is not to Russia’s advantage but important for Germany. As I described Nord Stream 2 in a previous piece:

It is not Russia which needs the pipeline. It can sell its gas to China for just as much as it makes by selling gas to Europe.
...
It is Germany, the EU’s economic powerhouse, that needs the pipeline and the gas flowing through it. Thanks to Chancellor Merkel’s misguided energy policy - she put an end to nuclear power in German after a tsunami in Japan destroyed three badly placed reactors - Germany urgently needs the gas to keep its already high electricity prices from rising further.

That the new pipeline will bypass old ones which run through the Ukraine is likewise to the benefit of Germany, not Russia. The pipeline infrastructure in the Ukraine is old and near to disrepair. The Ukraine has no money to renew it. Politically it is under U.S. influence. It could use its control over the energy flow to the EU for blackmail. (It already tried once.) The new pipeline, laid at the bottom of the Baltic sea, requires no payment for crossing Ukrainian land and is safe from potential malign influence.

Maybe Chancellor Merkel on her recent visit to Washington DC finally managed to explain that to the Biden administration. More likely though she simply told the U.S. to f*** off. Whatever - the result is in. As the Wall Street Journal reports today:

The U.S. and Germany have reached an agreement allowing completion of the Nord Stream 2 natural gas pipeline, officials from both countries say.

The U.S. also would retain the prerogative of levying future pipeline sanctions in the case of actions deemed to represent Russian energy coercion, officials in Washington said.

So Germany will spend some chump change to buy up, together with the U.S,  a few Ukrainian companies that are involved in solar or wind mill stuff. It will 'support' some irrelevant talks by maybe paying for the coffee. It also promises to try something that it has no way to succeed in.

That’s all just a fig leaf. The U.S. really gave up without receiving anything for itself or for its client regime in the Ukraine.

In the midst of tense negotiations with Berlin over a controversial Russia-to-Germany pipeline, the Biden administration is asking a friendly country to stay quiet about its vociferous opposition. And Ukraine is not happy.

U.S. officials have signaled that they’ve given up on stopping the project, known as the Nord Stream 2 pipeline, and are now scrambling to contain the damage by striking a grand bargain with Germany.

At the same time, administration officials have quietly urged their Ukrainian counterparts to withhold criticism of a forthcoming agreement with Germany involving the pipeline, according to four people with knowledge of the conversations.

The U.S. officials have indicated that going public with opposition to the forthcoming agreement could damage the Washington-Kyiv bilateral relationship, those sources said. The officials have also urged the Ukrainians not to discuss the U.S. and Germany’s potential plans with Congress.

If Trump had done the above Speaker of the House Nancy Pelosi would have called for another impeachment.

The Ukrainian President Zelensky is furious over the deal and about being told to shut up. But there is little he can do but to accept the booby price the Biden administration offered him:

U.S. officials’ pressure on Ukrainian officials to withhold criticism of whatever final deal the Americans and the Germans reach will face significant resistance.

A source close to Ukrainian President Volodymyr Zelensky said that Kyiv’s position is that U.S. sanctions could still stop completion of the project, if only the Biden administration had the will to use them at the construction and certification stages. That person said Kyiv remains staunchly opposed to the project.

Meanwhile, the Biden administration gave Zelensky a date for a meeting at the White House with the president later this summer, according to a senior administration official.

Nord Stream 2 is to 96% ready. Its testing will start in August or September and by the years end it will hopefully deliver gas to western Europe.

Talks about building Nord Stream 3 are likely to start soon.