U.S. Government Provides Another Trove Of Offshore Papers Of People It Dislikes

So there is another 'leak' of papers about tax saving offshore investments by people the U.S. doesn’t like:

The secret deals and hidden assets of some of the world’s richest and most powerful people have been revealed in the biggest trove of leaked offshore data in history.

Branded the Pandora papers, the cache includes 11.9m files from companies hired by wealthy clients to create offshore structures and trusts in tax havens such as Panama, Dubai, Monaco, Switzerland and the Cayman Islands.
...
The files were leaked to the International Consortium of Investigative Journalists (ICIJ) in Washington. It shared access to the leaked data with select media partners including the Guardian, BBC Panorama, Le Monde and the Washington Post. More than 600 journalists have sifted through the files as part of a massive global investigation.

The Pandora papers represent the latest – and largest in terms of data volume – in a series of major leaks of financial data that have convulsed the offshore world since 2013.

The papers are said to come from a total of 14 offshore providers of legal vehicles which allow people to hide their money and to avoid tax payments.

There is however not hint of how these papers were acquired. Who had gained access to them? How? What was the chain of custody for these? Are these the complete files of those 14 companies or were some removed before publishing? Which ones? Are all of those files authenticated and verified or is some forged material mixed in between them?

Unfortunately none of the reports about the 'leak' I have read has covered those questions.

But there are at least two big hints that these 'Pandora papers’ are, like the 'Panama papers’ five years ago, and the 'Paradise papers’ four years ago, part of an 'information operation’ by the usual 5-eyes suspects, the secret services of the U.S., UK, Canada, Australia and New Zealand.

On June 3 2021 the White House held a Background Press Call by Senior Administration Officials on the Fight Against Corruption:

SENIOR ADMINISTRATION OFFICIAL: Great. Thanks. Hi, everybody. Good morning and thanks for joining the call today. I am really excited to be speaking to all of you about the President’s anti-corruption agenda in advance of our rollout later this morning of a national security study memorandum — that’s NSSM — on the fight against corruption.
...
So, with the memorandum, President Biden is formally establishing the fight against corruption as a core national security interest of the United States. That was a commitment that he made during the campaign. And his pledge was that he would prioritize anti-corruption efforts and bring additional transparency to the U.S. and international financial systems.

The memorandum in question is available here. It is quite short. Under "Section 2: Strategy" there are several interesting points:

(c) Hold accountable corrupt individuals, transnational criminal organizations, and their facilitators, including by, and where appropriate, identifying, freezing, and recovering stolen assets through increased information sharing and intelligence collection and analysis, criminal or civil enforcement actions, advisories, and sanctions or other authorities, and, where possible and appropriate, returning recovered assets for the benefit of the citizens harmed by corruption;
...
(e) Support and strengthen the capacity of civil society, media, and other oversight and accountability actors to conduct research and analysis on corruption trends, advocate for preventative measures, investigate and uncover corruption, hold leaders accountable, and inform and support government accountability and reform efforts, and work to provide these actors a safe and open operating environment domestically and internationally;

(f) Work with international partners to counteract strategic corruption by foreign leaders, foreign state-owned or affiliated enterprises, transnational criminal organizations, and other foreign actors and their domestic collaborators, including, by closing loopholes exploited by these actors to interfere in democratic processes in the United States and abroad;

With yesterday’s 'leak' we see a first implementation of that strategy.

The U.S. is using its intelligence capabilities, i.e. to hack into the systems of offshore service providers, and selectively releases whatever it might find useful for its aim to the 'civil society’ and media who publish (or not) whatever dirt they are given.

In the Q&A of their background briefing the 'senior administration officials’ confirmed that was exactly what they were planning to do:

Q Thank you for doing this. As you know, anti-corruption activists periodically urge the U.S. government to use its various assets and capabilities, including the intelligence community, to expose specific cases of corruption overseas, to name and shame corrupt officials — and the arguments they make are familiar — but also include not only, you know, a deterrent to corruption, but also a possible contribution to the promotion of democracy.

Does the does the memorandum — does the program include any component that connects with that?

SENIOR ADMINISTRATION OFFICIAL: What I can say on that front is that the memorandum includes components of the intelligence community. So, the work on that front, in part, remains to be seen, but they are included — the Director of National Intelligence and Central Intelligence Agency.

And so we’re just going to be looking at all of the tools in our disposal to make sure that we identify corruption where it’s happening and take appropriate policy responses.

And I’ll take the opportunity to mention that we’re also going to be using this effort to think about what more we can do to bolster other actors that are out in the world exposing corruption and bringing it to light.

So, of course, the U.S. government has its own internal methods, but, largely, the way that corruption is exposed is through the work of investigative journalists and investigative NGOs.

The U.S. government — to my point earlier, in terms of the support we’re already providing — in some instances provides support to these actors. And we’ll be looking at what more we can do on that front as well.

Q What does the word “support” mean in that context?

The allegedly independent Organized Crime And Corruption Reporting Project (OCCRP) is funded, like the International Consortium of Investigative Journalists (ICIJ), through various 'western' foundations and 'western' governments. As the 'senior administration official’ admits it was 'jumpstarted' by the U.S. (and British) government.

The U.S. has copied the model of WikiLeaks. In 2017 the Trump administration designated WikiLeaks as a “non-state hostile intelligence service” for publishing secret government papers given to it by whistle-blowers who exposed murder, hacking and other misdeeds by the U.S. government.

The U.S. has for many years propped up competition to Wikileaks by founding and/or supporting OCCRP, ICIJ and similar organizations who are fed with materials provided by 5-eyes intelligence agencies. These organizations are "non-state friendly intelligence service” for publishing private papers of people the 5-eyes dislike.

A lengthy recent Yahoo piece on Julian Assange and WikiLeaks (see corrections to its 'Russiagate' nonsense here) explicitly made that point:

Yet spy services are increasingly using a WikiLeaks-like model of posting stolen materials online. In 2018, the Trump administration granted the CIA aggressive new secret authorities to undertake the same sort of hack-and-dump operations for which Russian intelligence has used WikiLeaks. Among other actions, the agency has used its new powers to covertly release information online about a Russian company that worked with Moscow’s spy apparatus.

The program was not launched under Trump but is, like the Biden memorandum above, just an extension of a program that has existed for years. OCCRP was founded in 2006 and at first hit only at eastern European governments. The 'Panama papers’ came out in 2016. The new 'Pandora papers’ are just a new variant of these.

A main purpose of these releases of stolen data is propaganda. Just look at the picture the Guardian put on top its story about them: 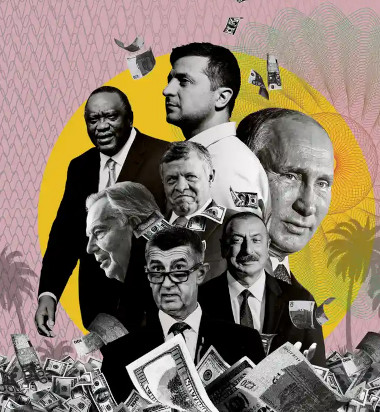 The by far biggest head in that picture is of Russia’s president Vladimir Putin. He is however not mentioned at all in the 'Pandora papers’ and there is no evidence that he has any offshore holdings or is exceptionally rich. The only relation he has with the story is this:

King Abdullah is among dozens of current and former leaders whose overseas investments were exposed. Other leaders included President Vladimir V. Putin of Russia, whose alleged former lover was found to have purchased an apartment in Monaco ...

So some rich Russian girl, who some 20 years ago allegedly(!) had an affair with Putin, bought an apartment in a foreign country using an offshore vehicle. (The "alleged" affair is btw a never confirmed rumor that was spread by the Russian outlet "Proekt" which was financed by the anti-Putin oligarch Khodorkovky who is living in London.)

How can that justify to lead the release, which names 35 current and former national leaders (but not Putin), many officials and dozens billionaires, with Putin’s picture? (In 2016 the Guardian did the same with the 'Panama papers’. Putin was not mention in those either but led in the Guardian story about them.)

Another hint that this is all U.S. government filtered propaganda (and blackmail material) comes from the lack of names of U.S. billionaires and corrupt politicians in the provided material. 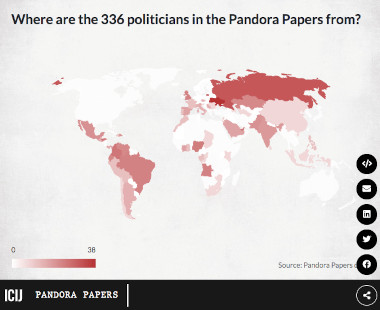 That none of their names are to be found in the published offshore services’ files points to a careful elimination of these.

The published papers are a system’s fake critique of itself. While they support U.S. foreign policy objectives by accusing people the U.S. does not like they will also lead to more support for financial surveillance and spyimg. By disgracing or eliminating overseas competition they promote U.S. tax havens like Alaska, Nevada and Delaware to foreign 'customers':

The Pandora Papers contains details on over 200 trusts set up in the U.S. in recent years. In dozens of cases, clients have abandoned more traditional havens, such as the British Virgin Islands and the Bahamas, in favor of the U.S.

The most popular destination has been South Dakota, where the past decade has seen the value of assets held in trusts reach more than $360 billion. State laws in South Dakota allow for the establishment of secret trusts which don’t have to pay a cent of tax to the state for any earnings. Unlike most states, which restrict the life of trusts to a century or less, South Dakota trusts are also “perpetual,” meaning they have no end date. This means they can continue making tax free gains and passing them on to future generations — theoretically forever.

So the U.S. set out to blame offshore tax havens and foreign leaders of corruption while it itself is the biggest sinner with regards to both. There is pattern in this. Whenever the U.S. accuses some foreign person or government of doing 'something' their is a high probability that 'something' is exactly what the U.S. is doing itself.