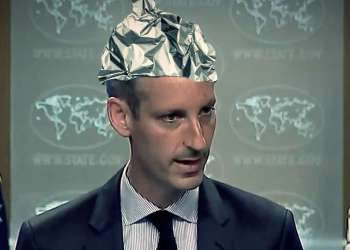 On Feb 3, CIA spook and current State Department spokescreature Ned Price made an astonishing announcement: the Russians are actively preparing a false flag attack on themselves in order to justify an invasion of Ukraine!

AP reporter Matt Lee followed up with a simple question: “Where is your evidence?”

It goes downhill for Price from there:

Price replies that the evidence is intelligence information contained in a “declassified report. ”

Lee asks where the report is.

Price says he “just gave it to him.”

Lee, apparently genuinely confused at this point, replies that there is no report. It’s just Ned Price reading unsubstantiated intelligence claims from a script on a stage, made up and wearing a suit and tie with a well-placed American flag behind him for added authority.

Need more proof? Price offers to “print a transcript” of his own comments from two minutes earlier…

Price accuses Lee of reflecting Russian disinformation and moves on to the next question.

You can read the transcript of Matt Lee’s Feb. 3 sadistic masterpiece in public humiliation here.

The government said it’s true, what else do you need? And when have they ever lied to start wars before…

State Department Ned: We have a report here that pansexual KGB Russian unicorns gather in the meadow at dusk to fellate each other and make plans to frame Ukraine for acts of war.

Reporter Matt Lee: How do you know that?

State Department Ned: The transcript from me saying it here is the report.

State Department Ned: I just gave you the evidence. Do you want the transcript from this briefing?

State Department Ned: You’re a communist infiltrator. Lady Liberty weeps that you are desecrating this sacred space in the State Department studio with Russian disinformation. 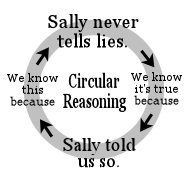 “What information?” is a baseline of human inquiry, the simplest possible question that a five-year-old asks reflexively.

It’s also all you need to stump a government PR spin artist on the public dole paid 6 figures to “communicate” professionally.

How Matt Lee is still allowed to question State Department talking heads is a mystery. He’s been a thorn in the government’s side for years, dating back to when Jen Psaki served as State Department mouthpiece in the Obama years.

Psaki debased herself so dutifully in the service of power, and proved herself so capable of lying shamefully through her saccharine style, that she earned herself a hard-fought promotion to WH press secretary/resident slay queen under the Biden regime.

These aren’t meant to strike at the root of the rot in the neoliberal corporate state, but rather just to get a snippy soundbite to feed to their boomer audiences.

Journalists like Matt Lee cuts through the gibberish like a knife through butter. He knows the makeup-wearing government stooge before him is lying, and the stooge knows he knows she’s lying. Without any chance to get an honest answer to his questions, his sole job becomes to drag them through the mud so the public can behold their naked perjury. It’s the closest thing to genuine art you can get in a soulless government propaganda facility.

For just as long as Matt Lee has pressed government representatives on their absurd claims, State Department spokespeople have deflected from his hard questions by insinuating he is doing Russian propaganda.

Matt Lee is a dying breed, a throwback as they call them – to when journalists did hard-nosed work holding corrupt leaders’ feet to the fire in the public eye.

It’s worth noting, though, that Matt Lee doesn’t possess any singular apparent phenomenal skill. He asks basic questions that any normal person would have when presented with government lies – lies so offensive not because of their content, but above all because they are told with the expectation that anyone with common sense would believe them.

Matt Lee is a living testament to the extreme mediocrity of the rest of the mainstream “journalists” in the room with him – to the extent that is what they can be called, rather than state stenographers.

For all its failures, at least back in the Iraq War days, the government rolled out its dutiful servant Colin Powell to put on a show for the UN in front of the camera.

In front of the world, Powell theatrically read his lines, menacingly dangling a vial that represented Saddam Hussein’s theoretical anthrax. 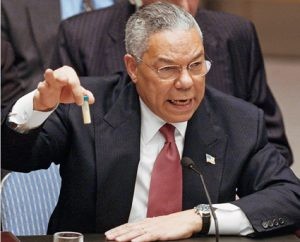 He swore to the world Hussein was developing WMDs to blow up the Western world.

Despite the obvious unanswerable questions – for what purpose would Hussein commit political and literal suicide by attacking the world’s superpower, how his rickety Third World regime could source the materials and expertise and build the infrastructure necessary to produce them all under the nose of intense international scrutiny, etc. – the media obediently repeated the patently absurd claims as fact.

And, based on those lies, the US went to war for a decade, wasted untold trillions, and shipped thousands of working-class Americans home in coffins.

There was zero actual evidence presented there just as Ned Price presented none on Feb 3, but at the very least Powell dangled the “anthrax” vile around.

Now, they dispensed with even the cheap theatrics: just take the government’s word for it! Don’t let petty memories of other countless elaborately crafted state lies prevent you from reflexive swallowing government narratives:

Which brings us to another fresh irony here: up until approximately five minutes ago, belief in “false flag attacks” were the sole domain of unhinged conspiracy theory nuts.

All of a sudden, when the Deep State’s geopolitical enemy is allegedly planning them (again, with no evidence presented), false flag attacks now exist.