Russia Has Launched Phase Two Of Its Operation In Ukraine

The neo-conservative 'Institute for the Study of War’ (ISW) releases daily 'Russian offensive campaign assessments’. A lot of people in Washington DC seem to read them.

They are of course pure propaganda only slightly aligned with the actual tactical situation in the Ukraine. I confess that I read them once a while purely for my amusement.

Their main source seems to be the Ukrainian defense ministry which is of course lying left and right about the state of the war.

This for example is from their assessment from Sunday, April 17:

Russian forces continued to amass on the Izyum axis and in eastern Ukraine, increasingly including low-quality proxy conscripts, in parallel with continuous – and unsuccessful – small-scale attacks. Russian forces did not take any territory on the Izyum axis or in Donetsk and Luhansk Oblasts in the past 24 hours. Russian forces deploying to eastern Ukraine reportedly continue to face significant morale and supply issues and appear unlikely to intend, or be able to, conduct a major offensive surge in the coming days. Deputy Ukrainian Minister of Defense Anna Malyar stated on April 17 that the Russian military is in no hurry to launch an offensive in eastern Ukraine, having learned from their experience from Kyiv – but Russian forces continue localized attacks and are likely unable to amass the cohesive combat power necessary for a major breakthrough.

I have no idea how anyone could have come to those conclusions.

What are these guys smoking?

Belatedly ISW took note of that:

Today the start of phase two of the Russian operation was officially announced:

Russian Foreign Minister Sergei Lavrov said on Tuesday that Moscow was starting a new stage of what it calls its special military operation in Ukraine which he predicted would be a significant development.

"Another stage of this operation (in eastern Ukraine) is beginning and I am sure this will be a very important moment of this entire special operation", Lavrov said in an interview with the India Today TV channel. 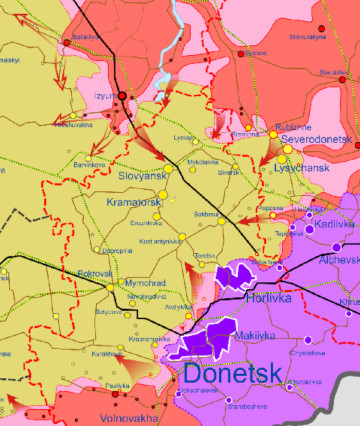 A major one is from Izyum (in the upper left on the map) towards Slovyansk. The distance between the two cities is 27 miles (47km).

Several villages on that route have already been taken. The "low quality proxy conscript" who "continue to face significant morale and supply issues", as ISW claims, might have something to do with that.

Phase two will include the liberation of all of Donetzk and Luhansk as demarcated on the above map by the dashed red lines.

I expect the whole phase two operation to take four to six weeks with maybe some extra time necessary to clean up the well defended cities Kramatorsk and Slovyansk.

Questions remain. Will there be a third phase? What will it include?