Disinfo Governance Board is Back: ‘White House Task Force to Address Online Harassment and Abuse’

The “Disinformation Governance Board” went belly-up last month. Apparently, the Orwellian authoritarianism was just too blatant.

But the censorship agenda certainly didn’t go away, it just changed forms. MAGA terrorists aren’t going to castrate themselves. It’s a dirty job, but someone’s got to do it.

Spare the rod, spoil the child.

The emotional pandering to justify censorship kicks off at 19:30 with an obscure professional tennis player cry bully and self-proclaimed “mental health advocate.” Her name is irrelevant in this context; what is relevant is her identity as a victim of the appropriate gender and race. She recounts with great melancholy, in somber tones, her vague story of “online abuse.”

She is a survivor of literal violence via the internet, she explains, stunning and brave. The gist of her complaint is that people are sometimes mean to her on Twitter. She doesn’t enjoy unpleasantness on social media, despite the fact that she’s a public figure. She equates unkind words to threats to her safety.

Obviously, ergo, words must be banned.

Progressive lioness, the very embodiment of bravery and stunningness, AOC, agrees. Once, leftist commentator Jimmy Dore wrote “fuck her” on the internet regarding a political dispute. That was also literal violence. 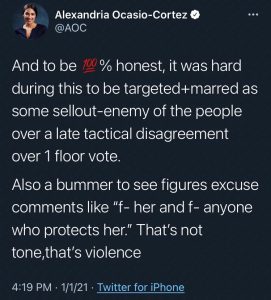 Having established the proper victim narrative – speech that privileged members of society don’t like is violence (and probably racist and transphobic and ableist as well) — Kamala Harris then presents herself.

She is in an equally melodramatic mood, as her handlers instructed her to be, for the inauguration of the White House Task Force to Address Online Harassment and Abuse.

Kamala congratulates the token victim promoting censorship for her stunning bravery. She includes in her affirming comments her weird, overly rehearsed sappy hand waving to denote nonverbal empathy. This unseemly communication strategy was presumably taught to her in some PR training program for robots to make them appear more humanlike.

The combination of Kamala’s arm-flailing and the translator on screen must raise hell for the actual hearing-disabled to keep up with all the nonverbal stuff. Then again, the whole spectacle is not really about accommodating the hearing disabled, is it? The performance is a virtue signal of the government’s “inclusiveness.”

Following Kamala, Attorney General Merrick Garland takes the stage. The top law enforcement official in the United States apparently has nothing better to do, like combatting fentanyl imports from China or prosecuting Wall St bankers actively demolishing the economy.

From his perch at the lectern, he declares a neoliberal fatwa against the First Amendment citing concerns over vague threats to the LGBTQ+++© community and Communities of Color©.

At 38:45, they introduce the diverse surgeon general festooned in his costume — intended to enhance his authority. 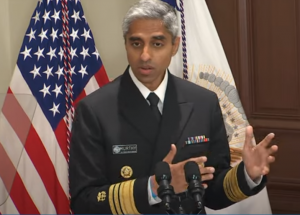 Online “harassment” and “abuse,” he explains using the nonverbal Kamala arms, is really a “public health” issue. Of course it is. Everything is now a biomedical state Public Health© permanent emergency. Why would online “harassment” be any different? The “experts” have deemed it so and assumed authority over everything.

The important questions they won’t ask are:

None of those questions are addressed even in passing. Instead, they merely announce the stripping of more of Americans’ rapidly vanishing rights by undermining fundamental Constitutional rights. No further explanation is required. Who needs legal authority – did you not see the diverse Person of Color© hatecrime victim at the beginning? Censorship is an emergency moral issue.

“Abuse” and “harassment” obviously — just like “hatespeech” or “dangerous speech” or any other machination of social justice academics — mean whatever the government wants them to mean at any given time.

Their definitions are flexible across contexts and wholly arbitrary.

I, for instance, got kicked off Facebook for merely using a word that rhymes with “canny” in jest. I didn’t mean it. The term wasn’t even directed at any particular individual! Whom did I “abuse”? Whom did I “harass”? Facebook never elaborated on the details.

At the time, there was no specific prohibition of that term on the platform – but it didn’t matter.

When you give a bureaucrat a ban hammer, everything becomes a nail – whether he/she/non-binary works for the government or a tech corporation (which, in practice, are increasingly one and the same).

This metaphor, one I’ve used probably a half dozen times, is cliché. But I don’t care because it’s perfect.

The social justice activists (and the government that uses them to justify their censorship regimes) are Hamas terrorists firing rockets from schools and hospitals. They frame their narratives to strawman their opponents as evil bigots attacking “online safety” or “human rights” or whatever. Any pushback is an attack on protected classes.

The “White House Task Force to Address Online Harassment and Abuse” is yet another cheap trick by political extremists to slip through Orwellian censorship regimes under the auspices of some variation of human rights.

Let us reject them and remove them from power.