Dismantling the Constitution: Police No Longer Have to Honor the Right to Remain Silent 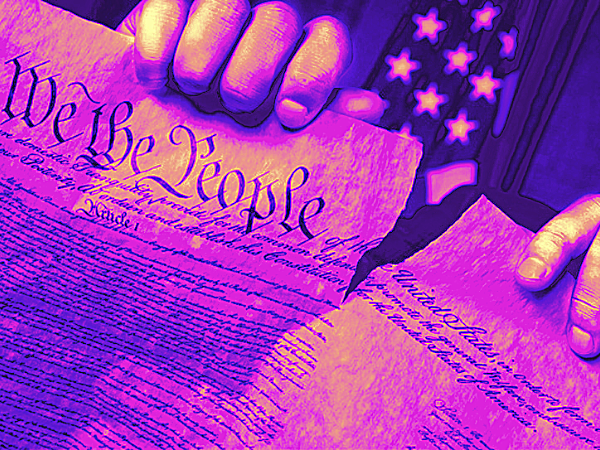 We are witnessing the gradual dismantling of every constitutional principle that serves as a bulwark against government tyranny, overreach and abuse.

As usual, the latest assault comes from the U.S. Supreme Court.

In a 6-3 ruling in Vega v. Tekoh, the Supreme Court took aim at the Miranda warnings, which require that police inform suspects that they have a right against self-incrimination when in police custody: namely, that they have a right to remain silent, to have an attorney present, and that anything they say and do can and will be used against them in a court of law.

Although the Supreme Court stopped short of overturning its 1966 ruling in Miranda v. Arizona, the conservative majority declared that individuals cannot hold police accountable for violating their Fifth Amendment right to remain silent.

By shielding police from lawsuits arising from their failure to Mirandize suspects, the Supreme Court has sent a message to police that they no longer have to respect a suspect’s right to remain silent.

In other words, concludes legal analyst Nick Sibilla, “the Supreme Court has effectively created a new legal immunity for cops accused of infringing on the Fifth Amendment’s protection against self-incrimination.”

Why is this important?

In totality, the rights enshrined in the Fifth Amendment speak to the Founders’ determination to protect the rights of the individual against a government with a natural inclination towards corruption, tyranny and thuggery.

The Founders were especially concerned with balancing the scales of justice in such a way that the innocent and the accused were not railroaded and browbeaten by government agents into coerced confessions, false convictions, or sham trials.

Indeed, so determined were the Founders to safeguard the rights of the innocent, even if it meant allowing a guilty person to go free, that Benjamin Franklin insisted, “It is better a hundred guilty persons should escape than one innocent person should suffer.”

Two hundred-plus years later, the Supreme Court (aided and abetted by the police state, Congress and Corporate America) has flipped that longstanding presumption of innocence on its head.

In our present suspect society, “we the people” are all presumed guilty until proven innocent.

With the Vega ruling, we have even fewer defenses for warding off government chicanery, abuse, threats and entrapment.

To be clear, the Supreme Court is not saying that we don’t have the right to remain silent when in police custody. It’s merely saying that we can’t sue the police for violating that right.

It’s a subtle difference but a significant one that could well encourage police to engage in the very sort of egregious misconduct at the heart of the Vega case: in which a police officer investigating a sexual assault isolated a suspect in a small, windowless room; refused him access to a lawyer or work colleagues; accused him of molesting a female patient; threatened him with violence; implied that he and his family would be deported; and terrorized him into signing a false confession dictated by the cop.

Although Terence Tekoh was eventually tried and acquitted, the Supreme Court refused to hold police accountable for browbeating an innocent man into making a false confession.

The Vega ruling threatens to turn the clocks back to a time when police resorted to physical brutality (beating, hanging, whipping) and mental torture in order to obtain confessions from suspects without ever informing them of their Fifth Amendment rights.

This was exactly the kind of misconduct that the Warren Court sought to discourage with its 5-4 ruling in Miranda v. Arizona.

As the Court concluded in Miranda almost 60 years ago:

The prosecution may not use statements, whether exculpatory or inculpatory, stemming from custodial interrogation of the defendant unless it demonstrates the use of procedural safeguards effective to secure the privilege against self-incrimination. By custodial interrogation, we mean questioning initiated by law enforcement officers after a person has been taken into custody or otherwise deprived of his freedom of action in any significant way. As for the procedural safeguards to be employed, unless other fully effective means are devised to inform accused persons of their right of silence and to assure a continuous opportunity to exercise it, the following measures are required. Prior to any questioning, the person must be warned that he has a right to remain silent, that any statement he does make may be used as evidence against him, and that he has a right to the presence of an attorney, either retained or appointed. The defendant may waive effectuation of these rights, provided the waiver is made voluntarily, knowingly and intelligently. If, however, he indicates in any manner and at any stage of the process that he wishes to consult with an attorney before speaking, there can be no questioning. Likewise, if the individual is alone and indicates in any manner that he does not wish to be interrogated, the police may not question him. The mere fact that he may have answered some questions or volunteered some statements on his own does not deprive him of the right to refrain from answering any further inquiries until he has consulted with an attorney and thereafter consents to be questioned.

The end result as one analyst notes: “Miranda v. Arizona, in creating the ‘Miranda Rights’ we take for granted today, reconciled the increasing police powers of the state with the basic rights of individuals.”

By largely doing away with Miranda, the Supreme Court has made its present position clear: anything goes if you’re a cop in the American police state.

Indeed, pay close to attention to the Court’s rulings lately, and the broader picture that emerges is of a judiciary that is playing fast and loose with the rule of law, picking and choose which rights to uphold and which can be discarded, in order to expand the power of the police state at the expense of the people’s rights.

If left unchecked, this constitutionally illiterate ruling will open the door to a new era of police abuses.

By shielding police from charges of grave misconduct while throwing the book at Americans for violating any of a rapidly expanding assortment of so-called crimes, the government has created a world in which there are two sets of laws: one set for the government and its gun-toting agents, and another set for you and me.

If you’re a cop in the American police state, you can already break the law in a myriad of ways without suffering any major, long-term consequences.

Indeed, not only are cops protected from most charges of wrongdoing—whether it’s shooting unarmed citizens (including children and old people), raping and abusing young women, falsifying police reports, trafficking drugs, or soliciting sex with minors—but even on the rare occasions when they are fired for misconduct, it’s only a matter of time before they get re-hired again.

For instance, police officer Jackie Neal was accused of putting his hands inside a woman’s panties, lifting up her shirt and feeling her breasts during a routine traffic stop. He remained on the police force. A year later, Neal was accused of digitally penetrating another woman. Still, he wasn’t fired or disciplined.

A few years after that, Neal—then serving as supervisor of the department’s youth program—was suspended for three days for having sex with a teenage girl participating in the program. As Reuters reports, “Neal never lost a dime in pay or a day off patrol: The union contract allowed him to serve the suspension using vacation days.”

Later that same year, Neal was arrested on charges that he handcuffed a woman in the rear seat of his police vehicle and then raped her. He was eventually fined $5,000 and sentenced to 14 months in prison, with five months off for “work and education.” The taxpayers of San Antonio got saddled with $500,000 to settle the case.

Now here’s the kicker: when the local city council attempted to amend the police union contract to create greater accountability for police misconduct, the police unions flexed their muscles and engaged in such a heated propaganda campaign that the city backed down.

This is how perverse justice in America has become, and it’s happening all across the country.

Incredibly, while our own constitutional protections against government abuses continue to be dismantled, a growing number of states are adopting Law Enforcement Officers’ Bill of Rights (LEOBoR)—written by police unions—which provides police officers accused of a crime with special due process rights and privileges not afforded to the average citizen.

In other words, the LEOBoR protects police officers from being treated as we are treated during criminal investigations: questioned unmercifully for hours on end, harassed, harangued, browbeaten, denied food, water and bathroom breaks, subjected to hostile interrogations, and left in the dark about our accusers and any charges and evidence against us.

These LEOBoRs epitomize everything that is wrong with America today.

Now every so often, police officers engaged in wrongdoing are actually charged for abusing their authority and using excessive force against American citizens. Occasionally, those officers are even sentenced for their crimes against the citizenry.

Yet in just about every case, it’s still the American taxpayer who foots the bill.

The ones who rarely ever feel the pinch are the officers accused or convicted of wrongdoing, “even if they are disciplined or terminated by their department, criminally prosecuted, or even imprisoned.”

In fact, police officers are more likely to be struck by lightning than be held financially accountable for their actions.

No matter which way you spin it, “we the people” are always on the losing end of the deal.

With the Supreme Court’s ruling in Vega v. Tekoh, the scales of justice have shifted out of balance even more.

Brace yourselves: as I make clear in my book Battlefield America: The War on the American People and in its fictional counterpart The Erik Blair Diaries, things are about to get downright ugly.