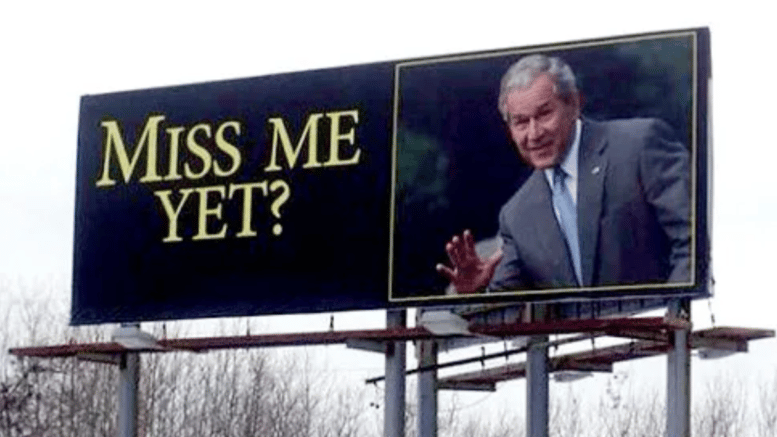 The pivot comes full circle as domestic terrorists replace Islamic Jihadists. The Center for Strategic and International Studies (CSIS) that supports this strategy has no less than 6 members of the Trilateral Commission on its Board of Directors, including Henry Kissinger and Leon Panetta. The Trilateral Commission is the headwaters of modern globalization, aka Technocracy. ⁃ TN Editor

The Biden administration has quietly perpetuated the state of ‘national emergency’ that was initiated after the 9/11 attacks, which were carried out by Islamic terrorists twenty-one years ago this month. On Tuesday, the White House declared the alleged ongoing state of national emergency by referring to the 2001 terror attacks:

The perpetuation of the national emergency comes amid accusations by rank-and-file FBI agents that the Biden administration is “exaggerating the threat of White supremacists and pressuring agents to cook up domestic terrorist cases involving racist extremists.”

“The demand for White supremacy” in the FBI “vastly outstrips the supply of White supremacy,” said one agent, who spoke with the Washington Times on the condition of anonymity. “We have more people assigned to investigate White supremacists than we can actually find.”

The FBI agent said the bureau’s leaders “have already determined that White supremacy is a problem” and have set a policy to prioritize finding incidents of racial violence to fit into the mold of ‘domestic terrorism.’

“We are sort of the lapdogs as the actual agents doing these sorts of investigations, trying to find a crime to fit otherwise First Amendment-protected activities,” one FBI agent said. “If they have a Gadsden flag and they own guns and they are mean at school board meetings, that’s probably a domestic terrorist.”

The Center for Strategic and International Studies in a 2020 analysis provides an illustration of how think tanks seize on politicized terrorism data to fit the left’s narrative that ‘right-wing extremists’ and ‘white supremacists’ constitute the single greatest threat to U.S. national security:

This analysis makes several arguments. First, far-right terrorism has significantly outpaced terrorism from other types of perpetrators, including from far-left networks and individuals inspired by the Islamic State and al-Qaeda. Right-wing attacks and plots account for the majority of all terrorist incidents in the United States since 1994, and the total number of right-wing attacks and plots has grown significantly during the past six years. Right-wing extremists perpetrated two thirds of the attacks and plots in the United States in 2019 and over 90 percent between January 1 and May 8, 2020. Second, terrorism in the United States will likely increase over the next year in response to several factors. One of the most concerning is the 2020 U.S. presidential election, before and after which extremists may resort to violence, depending on the outcome of the election. Far-right and far-left networks have used violence against each other at protests, raising the possibility of escalating violence during the election period.

The CSIS provides a chart of the ‘percentage of terrorist attacks and plots by perpetrator orientation’ below (1994-2020): 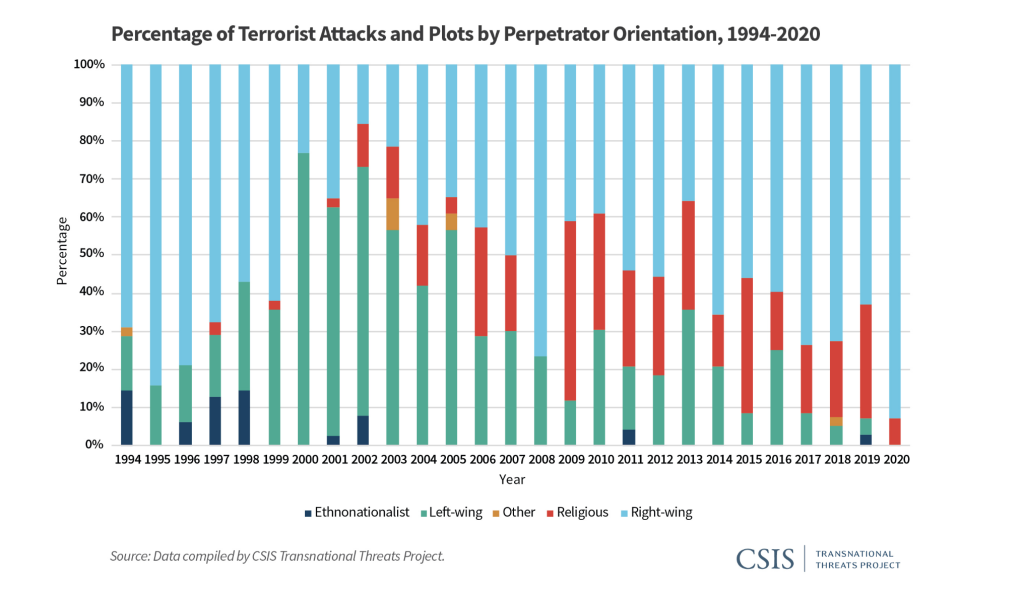 While a CSIS frequency chart conflates the number of ‘terrorist attacks’ and ‘plots,’ which further clouds the actual nature of the argued terrorism threat: 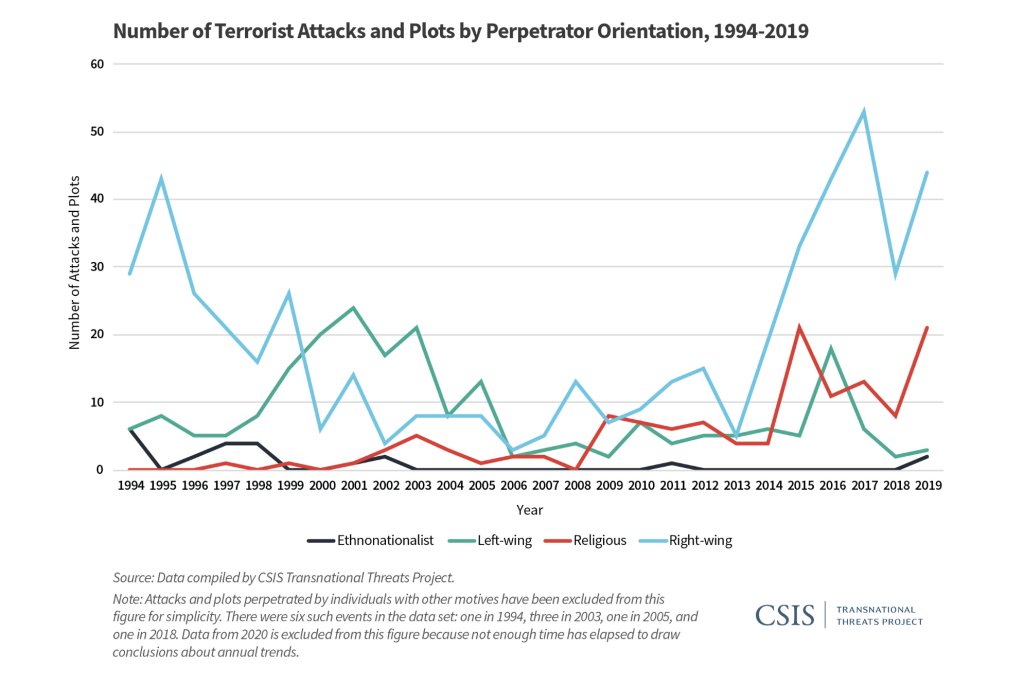 he Department of Homeland Security in a 2022 National Terrorism Advisory System Bulletin provides a snapshot of recent acts of political violence that highlights how terror attacks can be misclassified as “right-wing”:

Here are a few facts about acts of political violence that have occurred under the Biden administration. Payton Gendron, the suspected Buffalo mass shooter, had leftist leanings and hated Fox News. The Waukesha Christmas Parade massacre that killed 5 people and injured 40 others was allegedly committed by a black nationalist who supports Black Lives Matter. The NYC subway mass shooting suspect was a black nationalist and BLM supporter. The July 2021 Capitol barricade attacker was a follower of Louis Farrakhan and National of Islam supporter. Salvador Ramos, the Uvalde mass shooting suspect who allegedly killed 19 schoolchildren and two educators, is a Hispanic-American and clearly not a ‘white supremacist.’ The Laguna Woods shooting suspect is a Chinese nationalist who was upset about Taiwan. A Tulsa hospital shooting suspect who was believed by some to be a ‘white supremacist’ was a black male upset at a local doctor.

The list could go on. Potential terrorism cases are arbitrarily not being included for reasons of political inconvenience, while others are distorted to fit the Biden administration and FBI narrative about ‘far-right extremism’ and ‘white supremacy.’

As the Washington Times points out, the FBI whistleblower accusations coincide with the White House’s creation of a new DOJ task force to combat domestic terrorism:

The agents’ revelations coincide with President Biden’s “United We Stand” summit Thursday at the White House. The summit built upon the administration’s push to root out racially motivated domestic violent extremists, which included the creation of a specialized Justice Department unit to combat domestic terrorism.

However, the FBI denies targeting groups according to their political ideology or radical identity.

“The FBI aggressively investigates threats posed by domestic violent extremists,” an FBI spokesperson told the Washington Times. “We do not investigate ideology, and we do not investigate particular cases based on the political views of the individuals involved. The FBI will continue to pursue threats or acts of violence, regardless of the underlying motivation or sociopolitical goal.”